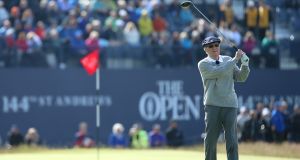 Peter Thomson tees off on the 18th during the Champion Golfers’ Challenge ahead of the 144th British Open at The Old Course in St Andrews in 2015. Photograph: Andrew Redington/Getty Images

The first Australian to win the major died at his home in Melbourne at 9am on Wednesday (Midnight Irish time Tuesday), his family told PGA Australia (PGAA).

Thomson had suffered from Parkinson’s disease for more than four years, the body said.

Fellow star of Australian golf Karrie Webb said he was an “Aussie legend and true gentleman of the game”.

Aged 24, Thomson became one of the youngest winners of the British Open Championship with a victory at Royal Birkdale in 1954.

He went on to win the Claret Jug a further four times over the next decade, a record only matched by the US’s Tom Watson and Scotsman James Braid in the 20th century.

All-time record holder Harry Vardon won only one more British Open, with six victories between 1896 and 1914.

Born Vale Peter Thomson on August 23 1929 in Brunswick, Victoria, he began playing professionally at 19 and won his first open in New Zealand in 1950, a competition he would win on a further eight occasions.

Thomson played only a few seasons in the US, which saw one victory at the 1956 Texas Open.

He was awarded an honorary degree from St Andrews University in 2005 alongside British stars Peter Alliss and Nick Faldo.

Thomson served as president of the PGAA for 32 years, during which time he also helped design and build courses in Australia and around the world.

He is survived by his wife Mary, son Andrew and daughters Deirdre Baker, Pan Prendergast and Fiona Stanway, his 11 grandchildren and four great-grandchildren.

1 Gerry Thornley: Wild reactions to this Ireland team as fickle as the wind
2 Man United’s net debt rises by €85.7m to €455.5m in three months
3 Doris and Kelleher make strong case to start against Italy
4 Dan Tuohy explains ‘rotten to the core’ comments
5 England and Eddie Jones at the vanguard of rugby’s hybrid era
Real news has value SUBSCRIBE