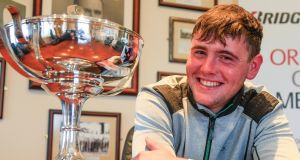 Robert Brazil, of Naas Golf Club, celebrates his victory over Alex Gleeson in the final of the West of Ireland Championship at Rosses’s Point.

The big-hitting 21-year-old was one up playing the last after a titanic battle played in a freezing northeast wind and driving rain at County Sligo’s Rosses Point links.

But while Gleeson heroically birdied the final hole from 15 feet to ask the question and give himself a chance of forcing a playoff, Brazill answered him emphatically by slamming his birdie into the back of the hole from 12 feet for a deserved one-hole win and Naas’s third triumph in the West since 2014.

“It’s unbelievable, absolutely unbelievable,” said Brazill, who paid tribute to his caddie Robbie Pierse for constantly reminding him that Gleeson was capable of holing everything.

“I never thought I would get to here. But I have put a lot of work in this winter and over the last few years working with my coach Gavin Lunny and playing with Jack [Hume] and Jonny [Yates], playing loads of golf with them.

“They are at a higher level than me so to compare my game with theirs has been great.”

Hume won the title in 2014 and Yates in 2016 and plus-two handicapper Brazill is clearly another huge talent.

His wins sends him straight to the top of the new Bridgestone Order of Merit - the new points list for the eight national and provincial “majors” which will award the leading two players a spot in the Irish team for the Home Internationals.

Brazill had to work hard to beat 18-year old Royal Portrush talent Jack Madden 2 and 1 in the semi-finals, coming back from two down after 11 holes with four wins in the next five to reach the decider.

He was the underdog against Gleeson, a former Junior member of the host club and former Irish Close champion who showed his class with a one-hole win over Portmarnock’s James Fox (35) in the other semi-final.

While Fox was two down after six, the 35-year-old fought back to be one up with three to play but lost the 16th and 17th to impressive pars by Gleeson and fell at the last.

In the final, Brazill was impressive all day, winning the third in birdie and then keeping his cool after Gleeson eagled the fifth from 12 feet and then made a 35 -footer at the seventh to go one up.

After getting back to all square with a par at the eighth, the Naas ace hit just a seven iron to the par-five 12th to put Gleeson under pressure and went one up there when the Castle man failed to match his two-putt birdie there, missing a four-footer.

The Irish international almost made a miraculous par at the 14th after being forced to take a penalty drop from an unplayable lie in the right rough. But after hitting a sensational third to eight feet, he missed his putt to find himself two down and never got back on terms.

While he won the 16th with a stunning par three, a half in bogey at the 17th left him hanging on for dear life and Brazill was ready to deliver the coup the grace at the last.

“I played really well all day, made one mistake on the tee shot on 14 and played a brilliant recovery shot and just missed it,” Gleeson said. “Those two putts on 12 and 14 were must-makes.

“I played well down the stretch and then to hole a birdie putt on the last, well at least I asked the question and to be fair, he popped it straight in the middle. It’s disappointing now, but I put in a good showing.”

Brazill thanked physiotherapist Dan Ryan for helping him with a hip problem earlier in the week, but it was his caddie who proved key.