Gary McDermott back for another crack at West of Ireland glory 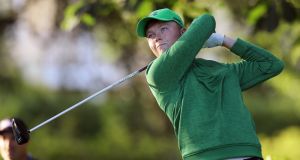 Robin Dawson: Tramore man is one of the favourites for the West of Ireland title. Photograph: Patrick Bolger/Getty Images

Reputations count for nothing when the wind whips across County Sligo for the annual West of Ireland Championship.

While eight members of the international panel are teeing it up in the first of two strokeplay qualifying rounds today, hoping to make the top 64 who will make Sunday’s first matchplay round, last year’s win by local hero Barry Anderson has given new hope to many still dreaming of lifting the famous old trophy.

Few Rosses Point natives have suffered as many disappointments as Gary McDermott, now playing out of Carton House in Kildare, as he seeks a Sligo man’s Holy Grail.

At the age of 36 and with an 18-month baby at home, the former international might have bigger priorities than golf but he has never lost his love for the “West”.

He came closest in 2011 when he was beaten by eventual champion Paul Cutler in the semi-finals and the fact the most recent of his five quarter-final loses came just last year proves it’s never too late to dream.

“I don’t have expectations so perhaps that can be a help rather than a hindrance,” McDermott said as he laced his shoes for another crack at a links softened by the recent poor weather but otherwise pristine. “It frees you up and you are not trying to impress anyone.”

Massereene’s Tiarnan McLarnon, another international and former Irish Close champion, is also expected to perform well but having played in last weekend’s Laytown and Bettystown Senior Scratch Cup and produced two solid rounds, McDermott will be a tough rival for any of the big guns.

“Those were my first two rounds since the All Ireland Cups and Shields last September,” McDermott said of his fourth-place finish at Laytown and Bettystown behind Rafferty, Mullarney and last year’s beaten West of Ireland finalist, Jack Pierse from Portmarnock.

“I surprised myself with how well I played. I had no expectations, and it’s much the same this week. I am here to see family friends and every day is a bonus.”

Ranked 96th in the world, 22-year-old Dawson has graduated from college and plans to spend the year playing golf full-time before taking another crack at the European Tour Q-School.

But after playing for Ireland in Argentina and South Africa before representing Great Britain and Ireland in the Bonallack Trophy in Qatar earlier this month, it’s almost a shock to the system to be facing the wild west wind as one of the title favourites.

“After the Bonallack Trophy I went to Sydney for a few weeks holiday, and I was playing in shorts and a tee shirt,” he said before tucking into a bowl of Rosses Point chowder. “This is a bit different, but I’m looking forward to it.

“Obviously, I’d love to win one of the Irish championships. I guess we just have to take it one day at a time and see how we go.”