Masters Diary: Shane Lowry is yet to master all his memorabilia

Up to measure; Norway arrives at Augusta; record lows; O’Meara not for returning 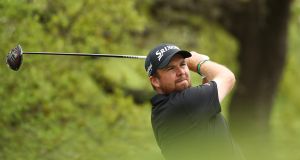 Shane Lowry will take home a Scotty Cameron Masters putter at the end of his week at Augusta National. Photograph: Ezra Shaw/Getty Images 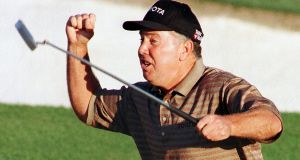 Mark O’Meara reacts to making a birdie putt on the 18th hole to win the 1998 Masters. Photograph: Timothy A Clary/AFP/Getty Images

Shane Lowry hasn’t got into the habit yet of accumulating golfing memorabilia to adorn the walls of his home.

This is his fourth time to play in the Masters and, for example, the Offalyman has no idea where the little competitors’ badges, which are like a code-breaker to Fort Knox in these parts this given week, are kept. “I’m useless for [storing] stuff like that,” he admitted.

The latest badge, by the way, is No 44 and is proudly – for this week at least – pinned into the collar of his shirt. If he wins, it’ll become a collector’s item in its own right.

One item that Lowry will, however, ensure he goes home with is a Scotty Cameron putter. “They do a Masters putter every year and I buy one of those. They’ll be cool to have when I’ve finished up,” said Lowry, who might some day get around to showcasing memorabilia in a more constructive way.

“I’ve become friendly with a guy in Palm Beach [in Florida]. He used pitch for the Yankees and, when you go into his house, all his memorabilia is there. I’m like, ‘how did you get time to do all this?’ And he told me it was when he started having kids.”

On that point, Lowry is looking forward to his daughter, Iris, donning the famed white caddie suit to walk with him around the Par 3 contest . . . and maybe she might even get a chance to hit a shot of her own on the ninth hole (if daddy isn’t in with a chance of winning!).

The winner of the Masters – since the tradition was introduced in 1949 – is presented with a green jacket.

But how do they get one to fit?

Well, what happens is that a selection of jackets of different sizes will be readied come Sunday afternoon as the potential winners go about the business of chasing the coveted Masters title . . . and the one deemed most suitable is presented, with the winner then having his measurements taken so that a custom-made jacket can be tailored.

Repeat winners will only have one green jacket . . . unless his size drastically changes!

Norwegian with woods tees it up for first time

Viktor Hovland will make a little history come Thursday when he becomes the first Norwegian to tee it up at the Masters.

The 21-year-old Oslo native forsake soccer for golf in his early teenage years and – on a scholarship to Oklahoma State – has made quite the impression Stateside: he was a dominant winner of the US Amateur at Pebble Beach last year, which earned him his ticket to Augusta, and last month made the cut at the Arnold Palmer Invitational.

Hovland, the number two ranked player on the world amateur rankings, is using his college golf coach, Alan Bratton, as his caddie this week and has his eyes set on turning professional, most likely after the US Open in June.

“The goal is to get on the PGA Tour as soon as possible . . . I think it would make most sense [after Pebble Beach],” he said.

“No, no, no, no” – Mark O’Meara on whether he had revised his decision to retire as a Masters competitor. The 1998 champion retired from playing in the Masters after missing the cut last year (in what was his 34th appearance) but has since shown good form on the Seniors Tour, winning the PGA Tour Champions tournament last month. He intends to play in the pre-tournament Par 3 contest.