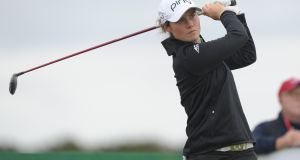 Leona Maguire has moved to the top of Symetra Tour rankings after her win at the Windsor Classic in California on Sunday. Photograph: Andy Buchanan/AFP/Getty Images)

Talk about taking giant strides. With her first professional win, Leona Maguire’s playoff success in the Windsor Classic on the Symetra Tour – in a rich vein of form which has seen her go 5-4-1 in her last three starts – has moved her to the top of the Volvik order of merit in her quest to claim a full LPGA Tour for next season.

Patience is a virtue but, also, a powerful tool in a golfer’s armoury: a year ago, Maguire – who’d delayed a move into the paid ranks – was dominating the world amateur rankings and preparing to graduate with a psychology degree from Duke University. Her move into the professional game came midway through the season, and she was playing catch-up from the get-go.

“I’ve been a bit more patient this year,” explained Maguire. “I think I was too eager to try and rush things too quick last year, trying to play catch-up too much, didn’t give myself enough rest.

“This year has been nice, working my way into the season with some really good finishes and trying to get better every week. I knew I would get there eventually, [it] took a little longer than I would have liked but it is a great feeling.”

The fact is that Maguire achieved her first win on the Symetra Tour in just her 17th start, on a circuit which is the pathway to the LPGA Tour. Maguire, who’d started the final round three shots adrift, outdueled Thailand’s Pajaree Anannarukarn with a birdie at the first hole of sudden-death to win the playoff.

“I’ve been so close for the past few weeks. I started off really well [in the final round], tried to keep my foot down,” said Maguire, who was the 36-hole leader in last week’s IOA Championship only to be blown away in the final round to ultimately finish fourth.

“I suppose being so close last week gave me a little bit of extra motivation and it tastes a little sweeter,” added the 24-year-old Co Cavan golfer, who closed with a final round 65 highlighted by a stretch of four straight birdies from the fourth.

While the Symetra Tour – and the route to the full LPGA Tour – will remain Maguire’s focus, she also plans for playing in a number of events on the Ladies’ European Tour and taking up a number of invitations to play on the LPGA Tour. Her latest win has also strengthened her position in the qualifying points table for next year’s Olympic Games in Japan.

“I won the tournament and that’s a happy moment. I thank God. I thank my parents. I thank my grandparents. It is an honour for me to join so many great Korean players” – Jin Young Ko after claiming a maiden Major title with her win in the ANA Inspiration. Ko’s win also propelled her to the top of the Rolex world rankings.

Graeme McDowell’s upward trending in the world rankings has seen him leapfrog from 257th to 115th inside the past month. McDowell was 257th after the Valspar Championship and jumped to 133rd in the rankings after his win in the Corales Championship in the Dominican Republic. G-Mac’s hot form continued in the Valero Texas Open where a top-10 finish jumped him to 115th in the latest standings.

Yessssss!!! @leona_maguire has won on the @ROAD2LPGA . This girl is an absolute superstar and cannot wait to see what her future holds – Singer (and Modest Golf! founder) Niall Horan predicts only one direction for Maguire.

Congrats @leona_maguire on your maiden victory, first of many. And the first is special. So make sure you celebrate – Pádraig Harrington knows the importance of celebrating those Ws on tour.

Congrats @Leona_maguire great start to your career delighted for you – Paul Dunne singing a similar tune.

In the Bag – Leona Maguire

A
Yes. Such an example would be if a player marks and lifts his or her ball in the general area after being requested to do so as it interferes with another player’s play. As a result of lifting the ball, a loose twig lying against the ball is moved. The player is not required to put the twig back when the ball is replaced.