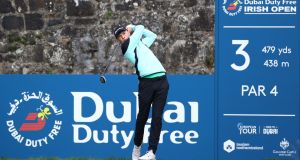 Irish amateur Mark Power carded a one-over 71 in the second round of the Dubai Duty Free Irish Open at Galgorm Castle and will play at the weekend. Photograph: Richard Heathcote/Getty Images

The infusion of fresh blood into Irish golf is obvious, and Mark Power’s onward and upward trajectory was demonstrated in the Dubai Duty Free Irish Open at Galgorm Castle as the Kilkenny golfer showed grit to go with his unquestioned golfing prowess with three birdies in his final five holes to ensure he made the cut on his European Tour debut.

Power has pedigree: his parents Mary Rose and Eddie won multiple Irish championships in their own playing days. And the 20-year-old – who is a student at Wake Forest University in the United States, the alma mater of Arnold Palmer – ensured he would be around for the weekend at the Co Antrim tournament venue with a second round 71 for 145, five over, set to be on the cutline.

With veteran caddie Dermot Byrne, the longtime bagman for Shane Lowry, by his side, Power showed his character in recovering from a double-bogey seven on the 10th to refocus and finish in style.

“I’d a bogey on nine and my head wasn’t in the right place hitting the tee shot on 10 and I pulled it into trouble. That [double bogey] got me focused. I thought I was going home after that but I was actually rolling the putter really nicely and stuck in there and picked up a few nice birdies on the way home,” he said, adding: “I’m delighted with that finish. It was a bit of a rollercoaster of emotions to be honest.”

Those birdies came on the 14th, 15th and 17th holes and Power paid tribute to his experienced caddie.

“Dermot completely relaxed me and got me to knuckle down and got me back in the zone, it was great to have someone of his experience on the bag and he has certainly been worth a few shots to me,” said Power, who had shown great form in recent months with a runner-up finish in the Brabazon Trophy (the English strokeplay championship) and reaching the semi-final of the British Amateur as well as a runner-up finish in last week’s Connacht Strokeplay.

Having shown such grit to make the weekend, Power hopes to kick on and hoping that his driving – normally his strong point – gets back on course, with a post-round visit to the range aimed at rectifying matters.

“I have struggled off the tee the last few days but managed to get it back on those last few holes. Driving will be a key to posting any scores over the weekend. My expectations here were just to try and make the cut, to get four rounds in at a pro event is big for me.

“I felt like I could contend here this week if I got off to a decent start but my game hasn’t been as sharp as I would like. So, to make it into the weekend with my game not at 100 per cent, I feel I can still shoot up the leaderboard if I get it together.”