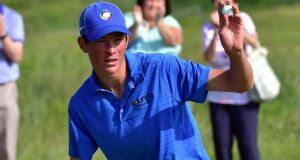 On a crystal clear day, with barely a breath of wind to even allow the fescue grasses to sway, we looked into a crystal ball and discovered the future in the shape of Cristo Lamprecht, as the 17-year-old South African overcame all-comers to become the first overseas winner of the famed East of Ireland Amateur Championship at Co Louth Golf Club.

A final round 71 for a 72-holes aggregate of 274, 14-under-par, gave Lamprecht – part of the Louis Oosthuizen Academy – a two-shot winning margin over another 17-year-old, Mark Power of Kilkenny who finished with a closing 68 for 276 which left him alone in second ahead of the trio of Caolan Rafferty, Tiarnan McLarnon and Devin Morley in this championship sponsored by The d Hotel.

For the second successive year, the famous trophy – engraved with the names of Darren Clarke and Paul Dunne among past champions – was claimed by a 17-year-old, with Lamprecht younger than last year’s champion Reece Black by almost seven months. That we will hear more of him seems certain, given he is part of an elite South African contingent, part-funded by billionaire businessman Johann Rupert, being geared for greatness.

Prior to teeing up here at the mouth of the river Boyne, Lamprecht’s itinerary included rounds at Ardglass, Royal County Down (for the Irish Amateur Open), Royal Dublin, Portmarnock and The European Club and his ability to learn the nuances of links golf, albeit aided to an extent by the fine conditions with little or no wind and glorious sunshine.

Still, Lamprecht had to tough it out at times. A rare worry came on the fourth hole of his final round when his tee-shot was pushed into the heavy rough down the right. As the large gallery assisted in the search, a voice shouted out. “Found it, Titleist 4?” But it was the wrong ball. “No, Titleist 2,” replied Lamprecht. A short time later, the panic was over. “Got it, no worries,” said the player to those offering their help.

Only briefly was his quest for the title threatened, as Rafferty – in the match ahead – reached 14-under through six holes only to stumble with bogeys on the eighth, 10th and 11th holes and fail to find a birdie coming home.

And Oughterard’s Devin Morley’s challenge faded too, as bogeys on the seventh, 11th and 17th put him on the back foot, although a fine birdie on the 18th ensured the University of Louisville student claimed a share of third.

As it transpired, Lamprecht’s main threat was two groups ahead in the form of two-time Irish Boys’ champion Power – who turns 18 next Saturday – who claimed birdies on the 13th, 14th and 17th but missed out on one at the finishing Par 5 18th.

“It was a bit disappointing at the end to come so close.....but I am really happy with that [result], I will take it,” said Power, who heads on to the British Amateur and European strokeplay in the coming weeks.

Lamprecht – a winner last year of the South African Amateur Championship – was unaware of such a charge from his fellow-teenager, as he kept his nerve to finish the job in style with a birdie on the 18th.

It was four years ago that Lamprecht first met with Oosthuizen – the 2004 British Open champion whose academy he is now a part of – and, although primed to take a collegiate route in the USA when he finishes his second level education, it is life on tour that he one day aspires to.

“I definitely want to turn pro some day. That’s a long-term goal. I will just focus on tomorrow and practice as much as I can. It’s a long road ahead.”

A wise head on young shoulders, this 6ft 7in Springbok looks like he knows where he is headed.