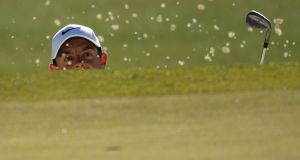 It was a tough day for Rory McIlroy who will need something special on Sunday at the 2017 US Masters. Photo: Brian Snyder/Reuters

In all of the elbowing to manoeuvre a way towards the summit of the leaderboard at this US Masters, Rory McIlroy got pushed around and left behind.

If McIlroy is to win the final leg of the career Grand Slam, he’ll have to shoot the lights out in the final round . . . and hope that everyone ahead of him gets dazzled in his taillights.

But the odds are heavily against him.

On a gloriously sunny day in Georgia, this third round rattled and hummed and finished with a couple of European heavy-hitters muscling a way to the top: Sergio Garcia, perhaps believing that his time has finally come on a Sunday that would have been Seve Ballesteros’ 60th birthday, and Justin Rose, already with a US Open title to his CV, shared the 54-hole lead on 210, six-under-par.

The two Europeans held a one stroke lead over Rickie Fowler, with a three-way tie for fourth that featured Jordan Spieth, Ryan Moore and Charley Hoffman, who suffered a late double-bogey when pulling his tee-shot into the pond on the 16th. To his credit, Hoffman showed fortitude to finish par-par. All of them can step into the final round with expectation.

Garcia, at times, showed terrific imagination in conjuring up a round of 70 – especially at the Par 5 15th where he deftly chipped from over the back of the green to two feet for a birdie, and then saved par coming in when using a fairway metal from off the 16th green. On the 18th, he showed grit too in holing an eight-footer for par to join Rose in a share of the lead.

But it was Rose who shone most of all, his 67 leapfrogging him towards the top. In particular, a stunning bogey-free homeward run of 31 – which featured five birdies in his closing seven holes – had the Englishman zoning in on the lead on moving day.

Of how he turned a round that was going nowhere around, Rose remarked: “The course offers you a run around the par 5s. I took advantage of the par 5s - eight, 13, 15 – and stole a couple more. It was a very solid round and then obviously finishing birdie-birdie (on 17 and 18), just kind of put the cherry on top of what was a good day.

“Obviously I’m a Major champion, but I’m looking for more and I’m certainly looking for my first Masters and my first green jacket. This is a place I dearly love and would dearly love to be part of the history here. Everybody has a story line and I’m not even touching upon past champions who are right there, as well. I’m certainly not getting ahead of myself. (Sunday)is a huge day. I have an opportunity. That’s all you want but really it starts on the back nine (in the final round),” added Rose.

Lurking two shots adrift, Spieth – who has finished 2nd-1st-2nd in his three Masters appearances – claimed his final round approach would be an aggressive one.

“I plan to play aggressive because at this point, it’s win or go home. So if you pull off the shots and you make the putts, then you know, I want to give myself a chance for that to be enough. And if I don’t, then so be it. Finishing fifth versus tenth doesn’t mean much to me, so that frees me up a bit,” said the American.

For McIlroy, there’s even more ground to make up.

The four-time major winner got off to a flying start with birdies on the second and third holes of his third round but unravelled with a double-bogey six on the seventh. The climb got steeper and steeper the further McIlroy advanced into his round, to the extent that it seemed his putter was more like an ice-pick it was that cold as he failed to take advantage of a number of chances.

The Northern Irishman eventually signed for a 71 for level-par 216 which left him in tied-11th, six shots adrift.

“The margins are so fine around this golf course, and I was just on the wrong side of it,” claimed McIlroy, identifying his eight-iron approach to the fifth (which came up short and led to a bogey) and then trying to be, as he put it, “too cute” with his bunker shot on the seventh which led to a three-putt after finding the back of the green.

Going into the final round six shots adrift and with 10 players to leapfrog – and especially given the quality of those ahead of him – makes for a tough assignment. A nothing to lose strategy for the final round, so?

“Yeah, but again you can’t start going for shots that aren’t there. You still need to play smart when you have to. Again, I’ll try to take my chances, birdie the par fives and birdie some of the other holes and try to not make too many mistakes,” said McIlroy.

If he’s to do it, he’ll need to execute the stragey to perfection, and get some help from others ahead of him.

Advanatge Messrs Garcia and Rose . . . and a crouching Spieth, ready to pounce.