Mickelson shows his sunnier side in California 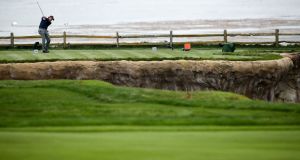 Phil Mickelson playing from the 18th tee during the second round of the US Open at Pebble Beach, California. Photograph: Ezra Shaw/Getty Images

To suggest Phil Mickelson and the United States Golf Association have not historically seen eye to eye would be akin to pointing out Mozart had a reasonable grasp of what may have constituted classical music.

Mickelson’s jibes – verging on castigation at times – towards those who preside over the US Open appeared to come to a head in 2018 when he was penalised for deliberately striking a moving ball at Shinnecock Hills. He later conceded “anger and frustration” – we all knew towards whom – got the better of him. There seemed, at that stage, no potential for reconciliation between one of golf’s ruling bodies and one of its most high-profile performers.

In what will not be topped as the shock of this golfing year, the left-handed Mickelson has lauded the USGA for its approach to this, the 119th US Open at Pebble Beach. The five-times Major winner, so caustic about what he regarded as ruinous course compositions in the past, performed the epitome of a volte-face.

“I have to hand it to the USGA for a great setup,” said Mickelson. “It’s the best I’ve ever seen. And it’s identifying the best players. It’s making the players the story.

“I just think that you’ve got to give credit when they do a good job like this. They’ve done a great job. There have been many times where one or two yards’ difference in hole location would have made a world of difference, given the conditions being so tough. And this week they’ve done a good job in doing that. They’ve really done a great job in letting the players kind of showcase their talents.”

It is worth reflecting on the scale of this U-turn. Only last month Mickelson had fired his latest broadside at the USGA.

“I’ve played, what, 29 US Opens,” he said. “One hundred per cent of time they have messed it up if it doesn’t rain. The rain is the governor. That’s the only governor they have. And if they don’t have a governor they don’t know how to control themselves.”

Mickelson skipped pre-tournament media duties on the Monterey Peninsula, doubtless because he was unwilling to get dragged into the wave of controversy that has dogged recent US Opens until this one.

If Mickelson’s California charm offensive is notable because of history, he has not been alone in delivering credit. There has been a general sense the USGA has been fair in its approach to Pebble Beach. Scoring has been good rather than excellent, poor play has been appropriately punished.

“I think they’ve done a great job with the golf course,” said Louis Oosthuizen who, unlike Mickelson, found himself competing for the main prize. “If you don’t drive it good around here or struggle with your iron play, you’re going to struggle. It’s so, so tough, the rough. And you still need to hit fairways, still need to hit greens.”

Oosthuizen agreed with Mickelson about the course setup at Pebble Beach, : “It’s nice to see red numbers in a US Open and I think it’s a little bit more exciting.”

The bigger picture for Mickelson is that the sands of time have surely run out on his quest to deliver a grand slam of major wins. He has been runner-up or tied second on six occasions at the US Open, the one event of golf’s key quartet to elude him. The last of those finishes was in 2013. Pebble Beach, where Mickelson has won five times in regular competition, looked his last opportunity to complete the set.

On the closing day of this US Open Mickelson turned 49. He would inevitably spend it in reflective mood. A California native, Mickelson’s grandfather, Alfred Santos, was a caddie at Pebble Beach when it opened as a course in 1919.

“I think that we, as players, need to look back kind of on our career and on our life with a lot of gratitude for the fact that we get to do this for a living. And when I’m here at Pebble Beach there’s no place that I am more grateful for the life that I’ve been able to lead and my career and my family and so forth.

“Especially going back with my grandfather being here and what this place here at Pebble Beach has meant to me over the years, and having so many great moments here.

“I can’t help but walk this golf course and feel grateful to all the great things in my life. This is a very spiritual place for me.”

Summer tours next in line for postponement as rugby assesses options 05:00
Favourite sporting moment? It’s a bit like choosing your favourite child . . . 01:00
My favourite sporting moment: When Zidane glided through Brazil in 2006 01:00
Angling Notes: Many fisheries have closed for the foreseeable future 00:00
Man City’s Gundogan says Liverpool deserve title if season cancelled 20:32
Here is your handy guide to sport on television this week