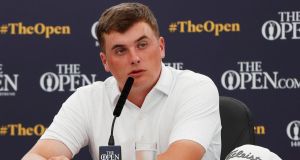 James Sugrue faces a battle to be fit for Thursday’s opening round of the British Open after suffering an insect bite. Photograph: Paul Childs/Reuters

James Sugrue is battling an infected bite on his calf to be fit to tee off at the Open Championship on Thursday.

But the 22-year-old County Cork native has been put on two courses of antibiotics in a bid to be ready for Thursday’s first round after suffering a nasty bite in Sweden.

“In Sweden my lower back got a little bit tight, so I was at the physio for that this morning,” said Sugrue.

“And I actually got a bite in Sweden as well, and the doctor had a look at it and he said it’s infected now.

“So it’s actually very sore to be honest, on my right calf.

“It’s inflamed, maybe four inches in radius and expanding out.

“So I’m on two sets of antibiotics and hopefully it will be okay by Thursday.”

Sugrue saw off Scotland’s Euan Walker at Portmarnock last month to book his spot in The Open’s first return to Portrush since 1951.

Mallow man Sugrue will also feature at the 2020 Masters and US Open, but first he is excited about turning out alongside Clarke.

“I think there’s a lot of members and friends who are coming, so it could be a fairly big crowd, and Darren will draw a lot of people too,” said Sugrue.

“I played with Darren in Portmarnock actually, I’ve played nine holes with him.

“There’s a champions weekend event where if you win the boys’ tournament you go there for the weekend and Darren will play golf with you.

“He’s unbelievable, I’ve never seen anyone able to hit a deck off the driver like he does.

“He’s one of the best ball strikers out there, so I can’t wait to play with him.

“Darren is pretty laid back, and hopefully I won’t be too intimidated by him anyway.

“So hopefully we can just feed off each other and play some decent golf.”

1 Saracens to accept second 35-point deduction and effective relegation
2 Welcome to Iten in Kenya – home of champions and cheats
3 James Lowe relishing the work, rest and play of his Irish rugby adventure
4 How do Klopp’s Liverpool measure up against greats of past?
5 Shane Lowry’s Abu Dhabi defence crumbles in the sand
Real news has value SUBSCRIBE