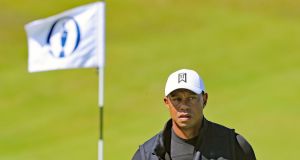 Tiger Woods on the eighth green during the first practice round at the British Open in Royal Portrush. Photo: Niall Carson/PA Wire

What’s the best way to beat jetlag? Well, as far as Tiger Woods was concerned, the remedy was to get straight out onto the links at Royal Portrush Golf Club: the 15-times Major champion, who hasn’t played since last month’s US Open, got his preparations under way for this 148th British Open on the Causeway Coast with a full round, playing alongside Patrick Reed.

And, on the first official day of practice, a day which saw large crowds converge on the course in what is an all-ticket sell-out for the championship that gets under way on Thursday, Woods was very much the star attraction among a multitude of big name playerss who sought to get acquainted with the links.

Rickie Fowler (having missed the cut in the Scottish Open), Dustin Johnson, Hideki Matsuyama, Jason Day, Bryson DeChambeau and Adam Scott were among those getting a taster of a course set-up in pristine condition. Scott, indeed, played a pre-arranged round with Darren Clarke, who knows the links like the back of his hand, in hoping to pick up some nuggets of information.

Phil Mickelson arrived to the course later in the afternoon, but preferred to do his ground work on the range working on his swing.

For Woods, who has played only nine times this year, his first sight of the Portrush terrain gave him a lot of take in. And given the amount of note-taking undertaken with his caddie Joe LaCava, Woods discovered there is no fast track way of getting to know the Dunluce links which is staging the event for the first time since 1951.

“Yeah, a lot of decisions off the tees, with all the angles. Now, with the wind switching coming out of the south in the future (days), a lot of these shots we hit today are useless. So, we’re trying to figure out what lines to take on and what lines not to take on. And these green complexes are so complicated, you have to miss in the right spot,” said Woods, who flew in from Florida and within two hours was out on the course.

Woods, Reed and their bagmen spent considerable time on the greens, in attempting to get to know nuances and speed. “There’s a lot of movement,” said Woods, who flew in Sunday morning and opted to get straight to the task ahead after taking a family holiday to Thailand following the US Open and without hitting a golf club for 15 days.

Woods’ pre-championship approach has proven to be starkly different to many other contenders, many who arrived in Ireland during the week to get their games conditioned. Jordan Spieth, for example, played a practice round at Portmarnock on Saturday to get the feel of links terrain, while another former champion Louis Oosthuizen spent the week playing links course, including taking in Ballybunion on the South African’s travels along the western seaboard.