Philip Reid picks his favourites, mid-rangers and dark horses for final Major of the year 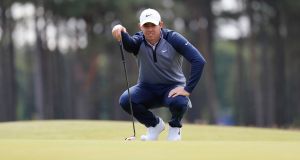 You have to fancy him, don’t you? Aside from that historical 61 on the (old) course as an amateur, McIlroy’s game has proven to be well-suited to this championship with top-five finishes, including a win in 2014, in his last four appearances. McIlroy has been a model of consistency so far this season – 10 top-10s in 12 outings – and has two wins to his name, in The Players and the Canadian Open. This is the one he’s been targeting all year, though.
Formline (last 5 events): 8-8-MC-1-9
Odds: 8/1

Rahmbo’s love affair with Irish links – two DDF Irish Open wins in the past three years – is no accident. His game is made for seaside golf, with an ability to mix driver when required with strategy. What’s more, the 24-year-old Spaniard cuts a far more mature figure these days, with a creative mind that enables him to execute shots.
Formline: MC-MC-3-2-1
Odds: 14/1

Okay, so he’s not a links specialist: last year’s appearance at Carnoustie was his debut appearance in the British Open, and he did managed a top-15 finish. What’s more impressive is how he has kicked-on in his career this season, most notably with an impressive win in the Memorial tournament.
Formline: 3-3-1-21-15
Odds: 28/1

Jeepers creepers, it’s hard to believe the Offalyman has missed the cut in each of the last four British Opens since a top-10 finish in 2014. But this is different. He knows Royal Portrush like the back of his hand - he’s a past North of Ireland winner! - and has coped better of late with the weight of expectation. Lowry’s having a fine season, despite a blip ahead of the Masters, with one win (in Abu Dhabi) and a run of form that suggests he is is comfortable in his own skin these days.
Formline: 3-8-2-28-34
Odds: 40/1

The change in nationality - from South African to Slovakian - has re-energised Sabbatini, who made the move with the intention of playing in next year’s Olympics. Kevin Na’s withdrawal has enabled Sabbatini to get into the field off the reserve list and he is worth an each-way look on the belief he’ll be more hot than cold. He hasn’t won on tour since the Honda Classic in 2011 but has improved his world ranking from 212th as recently as April up to 86th currently.
Formline: 6-27-43-3-MC
Odds: 125/1