Your A to Z guide to the British Open 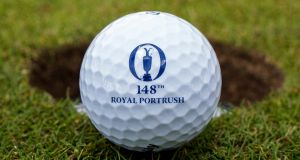 is for Belt. When the championship was first held in 1860, the winner did not receive prize money or the Claret Jug. The original champion’s prize was the silver Challenge Belt, a wide, red Moroccan leather belt decorated with a large silver buckle adorned with a golfing scene and medallions denoting the winner’s score. The belt was awarded to the winner from 1860 through to 1870, when Tom Morris Junior won his third title and was allowed to keep the belt.

is for Calamity Corner, the 236 yards Par 3 16th hole which is recognised as one of the finest “short” holes in the world. There are no bunkers on the hole simply because the challenge is already tough enough. Apart from the hole’s length, a deep chasm runs between tee and green.

is for Big D, as in Darren Clarke - winner of the championship in 2011, his only career Major - who was an influential player in the British Open’s return to Royal Portrush. Clarke, a resident of the town, saw the staging of the Irish Open in 2012 as the ideal showcase to get the Big One back and never missed an opportunity to remind then R&A chief Peter Dawson of how good it would be.

is for Etiquette . . . which extends outside the ropes to the spectators. We expect to hear none of those idiotic outpourings such as “Baba Booey, ” “Mashed Potatoes,” “Cheeseburger” and “Get in the Hole” that unfortunately are taken very much for granted across the Atlantic.

is for Frankie, as in Molinari. The Italian is the defending champion - having claimed the title at Carnoustie last year - but without a win since capturing the Arnold Palmer Invitational back in March.

is for Gary. No, not Gary Woodland. Rather, Gary Player. The South African holds the record for the most number of appearances in the championship: Player competed in the British Open on 46 occasions, winning three times. His first Major win came in the championship at Muirfield in 1959, one of three Claret Jugs that the Black Knight won in his career.

is for Himalayas which is the name given to the Par 10th hole, one of 447 yards. The hole was actually conceived in 1939 by Royal Portrush club professional PG Stevenson, who came up with the concept to Harry Colt who wondered why he hadn’t thought of it. For this championship, a new back tee has been added and the green has been resurfaced to make it more Colt-like in character.

is for Irish Major Champions . . . Fred Daly’s win in the 1947 British Open had him as the only Irish player to win a Major until Pádraig Harrington’s victory in 2007 at Carnoustie opened the floodgates. Harrington (3), Rory McIlroy (4), Darren Clarke (1) and Graeme McDowell (1) have provided a golden generation of Irish golfers winning on the biggest stages of all since that drought back to Daly was ended.

for John Daly, who won’t be playing after the R&A turned down the American’s request to use a buggy. “We believe that walking the course is an integral part of the Championship and is central to the tradition of links golf which is synonymous with The Open,” said the R&A in declining the 1995 champion’s request.

for Knockdowns, a type of shot that players will attempt if hitting into the wind. Knockdown shots are typically played with the ball back in the player’s stand and with a shorter backswing and follow through and are designed to keep the ball flight low.

for Lie, as it how the ball is resting on the links turf. As the legendary Bobby Jones put it, “Golf is the closest game to the game we call life. You get bad breaks from good shots; you get good breaks from bad shots - but you have to play the ball where it lies.”

for Mobile Phones, which are allowed on the course but which must be put to silent mode; all calls must be placed or received in designated Mobile Device Zones - at a number of points around the course - and no audio or video recordings by spectators is permitted at any time. Spectators can take still photographs during the practice days but not on championship days.

for Niblick, a favoured club of players in the 19th century which is now obsolete. The Niblick was regarded as a club to get out of trouble and for use in short game play, with a very small rounded head and a loft similar to that of a modern-day 9-iron or pitching wedge.

is for Old Tom Morris, who is the oldest winner. Old Tom’s win in 1867 came when he was 46 years and 99 days. Of course, his son Young Tom also holds a record that is likely to stay around a bit longer. The young fella was only 17 years and five months old when he succeeded his father as champion in 1868.

is for Purgatory, that place between heaven and hell. In this case, it is the 17th hole - the Par 4 of 408 yards - that will play as the penultimate hole. A number of changes to the hole have been made by the design team of MacKenzie & Ebert: a back tee has been added and a new fairway bunker down the left at the bottom of the steep slope.

is for Queues for the toilets which are a fact of life at these big sporting events. Toilet facilities are located in compound areas near the third hole, the fourth green, between the 15th and 17th fairways and in the area between the 18th fairway and the practice range. The Spectator Village - located on what used to be the old 17th and 18th holes - is a spectator wonderland that includes merchandising, food and drinks outlets, large TV screens . . . and, yes, more toilet facilities.

is for Rory, the “Boy Wonder” himself. McIlroy - a four-time Major champion - is the most successful Irish golfer of all time and has top-five finishes in the British Open in each of his last four appearances: winner in 2014, tied-fifth in 2016, tied-fourth in 2017 and runner-up last year. He didn’t defend his title in 2015 due to suffering an ankle injury playing 5-a-side football.

is for Satellite Navigation Systems . . . as in, turn them off if you’re driving to Portrush. Spectators driving to the championship are advised to follow the Variable Messaging Signs and AA signage to the designated park and rides rather than using Sat Navs. Shuttle buses operate from the various park and ride venues. The cost of parking is £10 for practice days, £15 for championship days. Weekly tickets cost £60 and a weekend bundle costs £25. Parking is available on theopen.com, the official site for the championship.

is for Ticket. If you haven’t got one, tough! Tickets are like gold dust, with this year’s championship the first in its history to be completely sold-out for all four tournament days. Some 20 percent of tickets were snapped up within 48 hours of the online ticketing sales process starting and it is expected that 250,000 spectators will pace through the gates during the week.

for Umbrella, which can double up as a walking stick if you like. Ireland being Ireland, there’s no absolute guarantee of a clear run of dry weather and the advance forecast for the north Antrim coast predicts some rain in the practice days but looks decent for the actual championship days with occasional rain forecast for Friday afternoon’s second round and again some morning rain for Sunday’s final round. The good news? It looks like the afternoon of the final day will see temperatures touching 21 degrees.

is for Vardon. Harry Vardon holds the record for most wins with six - 1896, 1898, 1899, 1903, 1911 and 1914 - in a glorious career. However, the Englishman’s handprint on golf goes further than that: he was the inventor of the overlapping grip which to this day is known as the Vardon grip, the most commonly used in golf.

for Walking, which is an integral part of going to watch any tournament. The “Red Route” is recommended for spectators who want to get out and about or who would like to follow a particular group from start to finish. Anyone who walks the route in its entirety will hit the recommended 10,000 daily steps, equating to approximately six kilometres.

for Xander Schauffele who is still searching for a breakthrough Major title of his own but who has been knocking on the door with his most recent attempts. Xander was shared runner-up behind Tiger Woods at the Masters and finished in a tie for third at the US Open at Pebble Beach. If you’re interested in a wee punt, he’s a 22/1 shot.

for Yoga, yes yoga . . . university studies have confirmed the benefits of golfers using yoga techniques to complement their swings. The research shows that yoga helps flexibility and strength, and can result in faster clubhead speed and increase a player’s range of motion.

for Zone, that mysterious place that players want to find when in the heat of battle. How to get into The Zone? Now, that is the question. The answer lies in a player’s ability to get into a psychological state where he can seem to do no wrong, where every shot is executed perfectly.