Bernd Wiesberger is the man to catch at the Scottish Open 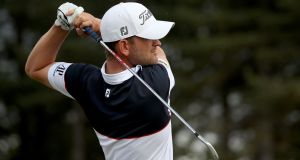 Austria’s Bernd Wiesberger during day three of the Scottish Open at The Renaissance Club. Photograph: PA

Austria’s Bernd Wiesberger will take a two-shot lead into the final round of the Scottish Open as he chases a second win in his last six starts.

Wiesberger, who also finished second in the Irish Open on Sunday, carded a third round of 65 at The Renaissance Club to finish 20 under par, with South Africa’s Erik Van Rooyen his nearest challenger following a 67.

France’s Romain Langasque and Italy’s Nino Bertasio were two shots further back, with former Ryder Cup star Jamie Donaldson and the English pair of Matt Wallace and Lee Slattery part of a five-strong group on 15 under.

Wiesberger, who missed seven months of last season after undergoing wrist surgery, said: “I’m enjoying being out there but am not looking ahead too far, there’s still a lot of golf to be played.

“I caught a bit of fire before the turn with four birdies in five holes and, although it kind of stalled a bit, I was happy to get a couple more late in the round. I am quite pleased with the way I handled myself and finished off.”

Donaldson has also recently returned to action following wrist surgery in November and won a one-round event on the 1836 Pro Golf Tour in March.

Sunday’s first prize is £927,000 and three places are also up for grabs in next week’s Open Championship at Royal Portrush, where Donaldson won his first European Tour title in the 2012 Irish Open.

“I’ll be keeping an eye on the leaderboard, I really want that Open spot of course, but winning is more important than that, that’s the primary goal,” Donaldson said after a 65.

“I just need to go out there and play like I played today and then I’ll be buzzing.”

Donaldson secured the winning point at Gleneagles in 2014 but is currently ranked 1,199th in the world and feared the injury to his left wrist meant his career might be over.

“I was just hoping it wasn’t,” the 43-year-old added. “There was no Plan B. There was a chance I could have taken a medical (exemption) this year and got the wrist perfect but I don’t know how long that would have taken and would I have ever got to that position?

“I certainly can’t get into a press-up position, I can’t put too much force into my wrist. But these things just take time and you’ve got to be patient.

“I played five mini-tournaments on the 1836 Tour, just trying to get back to competitive play. Psychologically you’ve got to get over the initial worry that you’re going to hurt it again.

“The swing over the past two or three years has probably gone off because of the wrist and now we’re trying to find positions where it was around Gleneagles sort of time.

“As soon as I put the club in the right place the wrist would start hurting so your body will always adjust to where the pain isn’t and that’s what it’s been doing the last two or three years.”

Former Open champion Henrik Stenson went 52 holes without a dropped shot before a double bogey on the 17th left him six shots off the lead alongside Matt Fitzpatrick and Italy’s Andrea Pavan, who made the cut on the mark of five under and surged through the field with a flawless 62.

Former world number one Justin Thomas was eight shots off the pace following a 70, while Rory McIlroy was a shot further back after a 68 which included four birdies in five holes from the fifth but also three bogeys.

“I feel like I played better than the score suggests and that’s been the story of the week,” McIlroy said. “The game is right there, I just need to go out tomorrow and shoot a good score and finish on a positive note.”