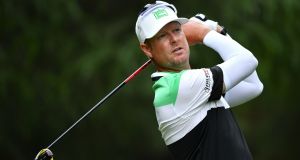 Jacques Blaauw of South Africa tees off on the 11th hole during the second round of the Joburg Open at Randpark Golf Club in Johannesburg. Photograph: Stuart Franklin/Getty Images

South Africa’s Jacques Blaauw carded his lowest round on the European Tour to lead the weather-delayed Joburg Open at Randpark Golf Club.

Blaauw completed a second round of 63 either side of play being suspended for an hour and 50 minutes due to the threat of lightning to finish 13 under par, a shot ahead of compatriot Wilco Nienaber.

Nienaber added a 67 to his opening 63 to occupy second place, two strokes ahead of Canada’s Aaron Cockerill. The second round is scheduled to resume on Saturday morning.

“I’m very happy I was able to finish,” Blaauw, who is chasing a first European Tour title, said after carding an eagle, seven birdies and a solitary bogey.

“I hit it very well all day and then made some putts. I only made one bogey, so I’m very happy. It was very windy out there, but I found it didn’t affect my distances that much.

“I can’t think ahead because there are two more rounds to go. Golf is the job and I need to get that job done. But I’ve done some good work in the build-up to this tournament and I’m very happy with how it’s turning out.

Nienaber held a share of the lead before play was suspended and, while Blaauw was able to pick up a birdie on the 17th on the resumption, the 20-year-old covered his last four holes in level par.

“A delay is never nice and I had it on that part of the course I really didn’t want it,” Nienaber said. “Those last four holes are really tough, but I got through it. I’m happy I finished.

“Hitting fairways here is key and I didn’t really do that today, so I had more par putts than birdie putts. I made it difficult for myself. But I’m really excited. I’ve put myself in a good position and I’m excited to see what happens on the weekend.”

Having made two bogeys in the first three holes of his second round, Northern Ireland’s Jonathan Caldwell bounced back and strung together a hat-trick of birdies on his back nine to card a one-under 70 to move to three under and inside the weekend cut mark.

Cormac Sharvin made a quadruple-bogey eight on the second hole, his 11th, as his hopes of making the cut fell away. He did bounce back with an eagle on the par-five fourth hole but a three-over 74 pushed him out to one over for the tournament.