Woodies composts €150,000 in plants due to shop closures 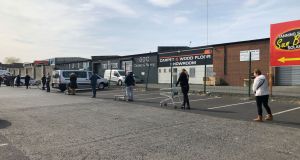 Queuing outside Woodies in Glasnevin prior to the closure.

The chief executive of DIY chain Woodies has told of how the company had to compost €150,000 worth of potted plants when their shops closed seven weeks ago.

Declan Ronayne told RTÉ radio’s Ryan Tubridy show that he was both nervous and excited about reopening next Monday and he recognised that shopping is no longer a pastime and it will be difficult for customers.

People are nervous about safety and Woodies has “a steely determination to keep everyone as safe as we can,” he said.

Mr Ronayne said that the recent closure was the longest Woodies had ever been shut.

“Customers need to be conscious of the fact that our 1,400 people haven’t been working for seven weeks and they’re a little bit nervous about this new world when we come back.

“Even before we closed, obviously we had queues outside the stores, we were only letting a limited number of people in. I managed one or two of those queues – in our Bray store and our Cork store, just to talk to customers and what came up again and again was the guys on their own or couples just saying ‘thanks be to god you’re open because I’d be going off my head’ and I said to people in our own business – we’re not in the DIY or gardening business, we’re in the mental health business because people want to do stuff, to keep busy, keep the head together while we all just work together to get through this.”

Over the past seven weeks Woodies have continued their online service which previously had been two per cent of business.

“After a week we said, we’ll get online up and running again, we opened up the website in full. We’re not huge online, Black Friday would be busy enough, we opened up at 12 o’clock on one day and by midnight that night we’d had three Black Fridays, the following day we had five Black Fridays.

Mr Ronayne said the company was very conscious that from now on customers will want to shop in a different way.

“Our primary focus when we reopen on Monday we’ll be managing queues of people – I’ll be in Bray first thing on Monday, we’ve already been in contact with the gardai, we’ll have a one way system into the car park and out.

“As we quieten down we see click and collect and kerb collect just being a normal part of our business for people who don’t want to go into the store.”