Wearing of face coverings advised but not a legal requirement, says Taoiseach confirms

An Taoiseach Leo Varadkar has announced that the Government will proceed with the first phase of the easing of the Covid-19 restrictions from Monday, May 18th. Video: RTÉ 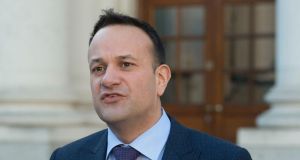 Taoiseach Leo Varadkar: ‘I can confirm that it is safe to proceed with phase one.’ Photograph: Dave Meehan for The Irish Times

Taoiseach Leo Varadkar has announced that the first phase of the lifting of the Covid-19 restrictions is to go ahead next Monday.

At a press conference in Government Buildings on Friday afternoon, Mr Varadkar indicated that the phased lifting of the restrictions, which have brought social and commercial life to a standstill since their introduction in March, will begin as scheduled after the weekend.

“I can confirm that it is safe to proceed with phase one,” Mr Varadkar said. He said that the Cabinet had approved the changes this morning, and he had notified the Stormont administration afterwards.

The next phase for reopening is due on Friday, June 5th, but Mr Varadkar this depends on the successful containment and suppression of the virus over the coming weeks.

The Taoiseach said that the Government was advising people to wear face coverings on public transport and in crowded places indoors, but this will not be a legal requirement.

However, the Chief Medical Officer Dr Tony Holohan warned that face coverings did not provide “some kind of magic shields against the disease”.

Minister for Heath Simon Harris said that the existing restrictions had avoided a disaster and saved thousands of lives. He said that observing the continuing restrictions would be necessary if Ireland is to avoid a second wave of the virus.

He advised against everyone rushing to garden centres at once, and urged people to maintain social distancing rules.

From Monday members of the public are advised to stay at home, and avoid unnecessary journeys, except for the following five reasons:

According to phase one of the Government’s roadmap for reopening, garden centres, farmers’ markets, will reopen as well as opticians, motor and bicycle repair shops and phone repair shops.

Outdoor workers in construction can return including gardeners and those working in allotments.

Up to four people who don’t live together can meet outdoors while keeping at least 2m apart.

Minister for Business Heather Humphreys warned businesses that they must be in a position to enforce social distancing and other safety measures before they can open. The Health and Safety Authority would supervise and enforce the rules, she said.

Ms Humphreys also announced a €250 million fund to supply grants to small businesses to enable them to reopen.

“If you have a hardware shop and you happen to have a small homeware section, you are allowed to sell, OK? But if you are a homeware shop, and that’s your main line of business, you can’t,” Ms Humphreys said.

If you need to buy a new pair of curtains, you can wait a couple of weeks,” Mr Harris added.

Now is not the time to decide I’m going to dicky up the house or buy a new pair of curtains,” he added.

Mr Varadkar said that hardware shops were being only opened because it was necessary for construction to reopen.

“This is a big economic sector, lots of people employed in it worth nearly half a billion euros to the economy each year and . . . we need to aligned or more or less aligned with what’s happening in the UK and France.”

Face-coverings should be worn in indoor settings where social distancing cannot be practised to limit the spread of coronavirus, public health officials recommended to Government earlier on Friday.

The National Public Health Emergency Team (Nphet) has also given the green light to the planned easing of restrictions from next Monday, The Irish Times understands.

The deaths of another 10 patients were announced by Nphet at its briefing on Thursday. There have now been 1,506 Covid-19 related deaths in the Republic. The total number of cases is now 23,827.

The Cabinet meets on Friday to discuss the package of recommendations from NPHET, which sources say contains “no surprises”.

The measures are then expected to be announced at a press conference attended by Taoiseach Leo Varadkar, Minister for Health Simon Harris and chief medical officer Dr Tony Holohan on Friday evening.

The proposal for people to wear face-coverings will be optional and is intended as an “additional hygiene measure” on top of existing advice on handwashing and social distancing.

NPHET’s advice, which will be the subject of a major public information campaign, stresses that not all people can wear face-coverings and no-one should be stigmatised for not doing so.

The campaign is also expected to provide advice to people on making their own face-coverings so that the supply of health-grade face-masks is not affected.

A growing number of prominent infectious diseases specialists now believe the scientific case for wearing them has shifted appreciably in their favour, though evidence is based on small studies.

It is understood that the Government will seek to clarify the change in restrictions that will allow four people from different households meet outside.

Some sources suggested that it may be recommended that people only meet in groups of four once a day, although this has yet to be confirmed, rather than meeting in different groups at different times throughout the day.

It was also stressed that it will not mean people can, for example, have guests over for barbecues. This would entail people from different family units using the bathroom in another person’s home, one source suggested.

It is also emphasised this will not mean people will be allowed visit the homes of friends or family. “We don’t want people in other people’s homes,” a source said.

“The five kilometre travel limit and social distancing will also apply to such meetings.”

According to phase one of the Government’s roadmap for reopening society and business, if medical advice allows, Monday, May 18th will see the beginning of phase one. It means garden centres, farmers’ markets, will reopen as well as opticians, motor and bicycle repair shops and phone repair shops. Outdoor workers in construction can return including gardeners and those working in allotments. Up to four people who don’t live together can meet outdoors while keeping at least two metres apart.

When asked about how long the current pandemic payment would continue, Mr Donohoe said on RTÉ’s Morning Ireland that government has not yet made a decision about an extension to the payment. Evaluations will have to be made about what the government might be able to offer in the future, he said.

“We want to recognise the strain and worry that people are experiencing and to assure them we will try to keep jobs.”

The level of intervention now in place had been enabled by the great care taken of the public finances in recent years, he said.

As soon as the government understands how the economy is responding it will better understand the economic consequences of the pandemic payments, he said.

“We want to see the effect of the reopening first.”

Taoiseach Leo Varadkar told the Dáil on Thursday the Government was increasingly confident that phase one of easing restrictions would go ahead on Monday.

He said the virus “is a fire in retreat. We must quench its every spark and stamp out every ember”.

Speaking in the Dáil during a debate on the impact of the Covid-19 pandemic he said “we are still in phase zero, The moment we assume progress is inevitable, we risk going backwards.”