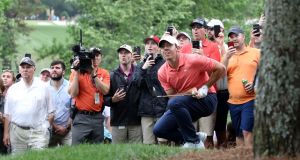 Rory McIlroy after his shot on the fifth hole during the final round of the Wells Fargo Championship at Quail Hollow club in Charlotte, North Carolina. Photograph: Streeter Lecka/Getty Images

Of the four Irish players currently exempt for next week’s US PGA Championship, to be played on the notoriously difficult Bethpage Black course, Pádraig Harrington – still struggling to regain form after his enforced absence earlier in the year due to a wrist injury – is alone in preparing with a scorecard in hand this week: he is in the field for the AT&T Byron Nelson in Dallas, where Brooks Koepka, who defends his Wanamaker Trophy title in the season’s second Major, is also playing.

For the trio of other Irish players who have exemptions into the PGA – Rory McIlroy, a two-time winner, Shane Lowry and Graeme McDowell – this is an off-week, at least as far as competition is concerned. And certainly it provides a few days for reflection in the case of McIlroy, who was shoved into reverse gear in the final round of the Wells Fargo Championship.

On the face of it another top 10 finish on tour – his eighth in nine appearances so far this season – would seem to represent a decent week’s work. However, the manner of McIlroy’s final round travails (signing for a 73 for 277), which included two three putts at critical points and a series of bad chips, brutally exposed elements of his game as he ultimately finished eight shots adrift of Max Homa.

Although McIlroy’s driving was at times untypically awry, the bigger concern was over his short game, as he acknowledged afterwards.

The plan? “Go back home [to Florida] this week, work on that a little bit, and get sharper in those areas...I didn’t feel like I chipped the ball particularly well,” he conceded.

That point was starkly highlighted by his play of the Par 5 10th in his final round, where a feat of escapology in escaping from trees with an approach to a greenside hollow was fatally undone with two duffed chips before he managed at the third attempt to find the putting surface as he ran up a double-bogey seven.

McIlroy revealed he had been alternating between two different wedges – one a 64 degree, the other a 60 degree – between the Masters at Augusta and the Wells Fargo at Quail Hollow, and that much of his planned work in the coming days will be in focusing on that aspect of his game in building up for Bethpage. He can’t find himself caught between two stools there.

The Northern Irishman has pencilled in tournament dates ahead of the last two Majors of the season, playing the Canadian Open before the US Open, and the Scottish Open the week before the British Open. Yet he has opted for a week free from tournament play before the PGA as he adopted for the Masters.

Of Bethpage, he said: “I’ve played three tournaments there, two FedEx Cup playoff events and a US Open [in 2009, tied-10th behind Lucas Glover]. I think it will be set up very similarly to the way that the PGA Tour events were set up. It’s sort of fair, it’s right in front of you . . . . so somewhere in the region of 8 to 12 under par will probably win.

“It’s a big golf course. You’ve got to hit it well off the tee, hit it in play, hit your irons good, and then obviously roll a couple of putts in. But it’s a really good course. It’s been one of my favourite venues for a while.”

While McIlroy gets to grips with his short game, and Lowry and McDowell also prepare away from tournament play, Harrington – on the back of missed cuts in the Zurich and the Wells Fargo – will hope for improvement in the Byron Nelson.

Tommy Fleetwood’s preparations are a little different ahead of the upcoming PGA: the Englishman is the tournament host for the British Masters at Hillside, outside Liverpool, on the European Tour. Paul Dunne, forced to withdraw early in his second round of the China Open, is in the field, along with Gavin Moynihan and Michael Hoey.

On the Challenge Tour three Irish players – Cormac Sharvin, Robin Dawson and Ruaidhrí McGee – are playing in the Prague Golf Challenge in the Czech Republic.

Leona Maguire, who was 614th in the world when turning professional less than a year ago, has risen to 225th in the updated Rolex rankings following her top-five finish in Dubai. The Co Cavan golfer returns stateside this week to play on the Symetra Tour, competing in the IOA Invitational at Milton, Georgia. Maguire is currently second on the Symetra Tour order of merit, behind Paraguay’s Julieta Granda, with the top 10 players at season’s end earning full LPGA Tour privileges for the 2020 season.