Out of Bounds: no better place than Augusta to stop and take stock 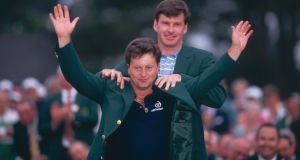 There comes a time when you have to stop and take stock.

As I walked through the security gates into Augusta National Golf Club for the first time this week on Monday morning, my pockets emptied of keys and wallet into plastic grey dishes, my laptop bag searched and, ultimately, my body required to make its way through the scanner, the experience - conducted with a friendliness by the security guards which camouflaged the necessity in this day-and-age for such measures - brought me back to how it used to be.

All of a sudden, I felt older.

My first visit here was back in 1991 and, although the Pinkerton security men and women of that time were as much as part of the layout as the azaleas, their very (large) presence was sufficient to keep one and all in order. Back then, there were no scanners or such like. Just a hearty southern welcome as you showed your credentials and walked on in.

So, time has flown. My first time at the Masters was all of 28 years ago - even writing it makes me feel old, which the lack of hair on my head these days would corroborate - and it was a year when Ian Woosnam, wearing those red checked pants, sank an eight-foot par putt on the 72nd hole to finish one stroke clear of Jose Maria Olazabal.

In those days, there’d been no need to have our computers checked at the security entrance if only for the fact that laptops were not a part of a reporter’s arsenal back then. No. Those were the days when reports were typed on a typewriter supplied to us in the media centre and, when the time came, we would form an orderly queue so that it could be faxed back to our offices.

The back-up plan was that copy could be filed over the ‘phone (reverse charges a must!), long before any type of electronic transfer became part-and-parcel of the job.

On that night, a couple of hours after his win, there was a hastily arranged press conference (in addition to the champion’s conference which took place in the media centre after the presentation) and Woosnam, with the popping of champagne corks as an accompaniment, took to enjoying the moment of what would be his greatest career triumph and he talked and talked and talked as if he had nowhere else to go.

In a Masters world where tradition means so much, much has changed. The new media centre is a state-of-the-art building which would have poor scribes believing they’d risen above their station in life. And, sure, perhaps we have.

The course too has changed. For that, we can thank the emergence of Tiger Woods mainly. Just six years after Woosie added a green jacket to his wardrobe, Tiger prowled the fairways in lifting his first US Masters title and what followed was a measure of so-called Tiger Proofing.

Woods, for sure, has left his own indelible imprint on the manicured turf. But so have many.

And the beauty of Augusta National is that, especially for those of us with a watching brief rather than the pressures of actually playing, there is no better place in the golfing world to stop and take stock. We may not smell the roses, but we can stop to smell the azaleas. And they’re blooming this week.

1 Gerry Thornley: Munster will make for interesting case study when rugby resumes
2 Game Changers: Gary O’Toole took a stand when others turned their heads
3 Racing regulator happy with screening protocols despite high-profile breaches
4 Georgia and Fiji in line to join Six Nations sides in eight-team tournament
5 James McClean says he gets no support for abuse he receives
Real news has value SUBSCRIBE

It’s not the Ryder Cup without fans - Tiger Woods backs postponement 17:29
Laytown beach races cancel September meeting due to coronavirus 16:24
Racing regulator happy with screening protocols despite high-profile breaches 15:50
McNamara hopeful that Ireland under-20s will get to compete for Grand Slam 15:32
GAA dressing rooms to remain closed until further notice 12:10
Here is your handy guide to sport on television this week