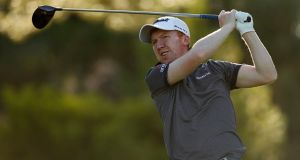 Gavin Moynihan of Ireland is three shots off the lead after the first round of the Oman Open. Photograph: Luke Walker/Getty Images

Gavin Moynihan carded a first round 69 at the Oman Open, leaving him three shots behind American Kurt Kitayama who holds a narrow lead in Muscat.

The Dublin native was on his was to a flawless opening round - with birdies on the 11th, 13th and 16th holes - before he bogeyed the par 4 17th. The 24 year-old made the shot back on the final hole however. Fellow Irishman Paul Dunne will go into Friday’s round two over par .

Kitayama, who came through all three stages of the qualifying school in 2018 and won on just his third European Tour start in Mauritius in December, recorded four birdies and an eagle in a flawless opening 66 at Al Mouj Golf.

That gave the world number 206 a one-shot lead over Scotland’s Scott Jamieson and Japan’s Yusaku Miyazato, with former Ryder Cup star Thomas Pieters and England’s David Horsey part of a seven-strong group on four under.

Defending champion Joost Luiten was a shot further back after a 69, with last year’s runner-up Chris Wood on level par in his first start of 2019 following an injury lay-off.

“I’m delighted with that,” Kitayama said. “Conditions were pretty tough so to be bogey-free was really good. My putting was great, I had great speed. I made a few putts outside 10 feet so that was really nice.

“I have a few more opportunities to play after my win. It makes it easier to plan my schedule but it’s my first year and I want to see most of the courses to plan for next year.

“I can understand why the guys rave about this golf course. It’s in great shape and it doesn’t get much purer than this.”

Jamieson also did not drop a single shot and birdied four of his last seven holes as he looks to bounce back from missing the cut in Dubai and Saudi Arabia.

“Being bogey-free is always good so a lovely start,” Jamieson said. “I drove it well and putted well. It’s difficult to hit it close here, the greens are firm and there’s a lot of run-offs around the green so you’re playing away from the flags.

“I was able to hole a couple of nice putts and had a chip-in on 17 as well which is always a bonus. I didn’t feel like I played particularly well but my game-plan was good and scoring well allowed me to shoot a low score.”

In his first round on the European Tour since April 2018, former Open champion Paul Lawrie carded an opening 71 as he returned after a lengthy injury lay-off.

Collated first round scores in the Oman Open (UK unless stated, par 72):