‘My thoughts remain with Ms Remande, I’ve asked to be kept informed of her condition’ 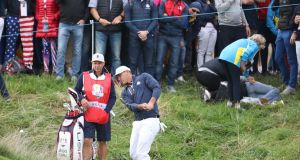 Brooks Koepka of the United States plays his second shot after his tee shot struck a spectator at the Ryder Cup. Photograph: Christian Petersen/Getty Images

American Brooks Koepka is “heartbroken” to learn a tee shot of his that struck a spectator at last week’s Ryder Cup in France has reportedly left the woman blinded in one eye.

Also on Tuesday, Ryder Cup organisers revealed they were helping Corine Remande, who said she was unable to see out of her right eye after being hit when Koepka’s drive veered wide of the fairway on the sixth hole on Friday, the opening day of the event between Europe and the United States.

“Doctors told me I had lost the use of that eye,” Remande told French news agency AFP.

Remande was treated at the course before being taken to hospital. US Open champion Koepka stopped to see how she was.

Koepka, who is in Scotland for this week’s European Tour event, issued a statement on Twitter on Tuesday expressing his concern at the incident.

“I was deeply hurt and saddened by the tragic accident that occurred when a shot I hit off the 6th tee struck Ms Remande,” he wrote.

“I spoke to her at the time on the golf course and after now learning her condition is worse than first thought, I have made contact with her/family to offer my sincere and heartfelt sympathy.

“I am heartbroken by the incident. My thoughts remain with Ms Remande and I have asked to be kept informed of her condition.”

“It is distressing to hear that someone might suffer long term consequences from a ball strike,” the spokesperson said.

Organisers promised to do as much as possible to help.

“We are hugely sympathetic and will do everything we can to support the spectator, insofar as that is possible under very difficult circumstances,” they said in a statement.

“We have been in communication with the family involved, starting with the immediate on-course treatment and thereafter to provide support, helping with the logistics of repatriation, including providing a transfer for the family from Paris to Lyon. We will continue to offer support for as long as necessary.”

Ball strikes in golf are an occasional hazard but serious injuries as a result are relatively rare.

“We can confirm that ‘fore’ was shouted several times but also appreciate how hard it can be to know when and where every ball is struck if you are in the crowd,” organisers said.

“Golf will definitely have to look at anything they can do to protect the fans but I have to say it’s the first time I’ve heard of an incident like this in the time I’ve played,” the Dane told Sky Sports News.

“It’s so unfortunate and all our thoughts from me and the team are with her at this moment.”

Tony Finau, who was partnering Koepka when the incident happened at Le Golf National confirmed they had yelled “fore” to warn fans the ball was off course.

“Every time you yell fore from that distance nobody is going to hear you,” he told Sky Sports News.

“People close to the green, unfortunately they are in play sometimes.”

The Royal & Ancient, custodians of golf’s laws and organisers of the British Open, state in the terms and conditions on the back of its Open tickets that spectators “assume all risk” of being struck by a golf ball.

The PGA Tour does likewise at US tournaments.

Rachael Blackmore’s Grand National victory resonates around the world 06:00
Louis and Robinson may have died broke but their legacy is timeless 06:00
Potential of Parsons and Wall put French and English on notice 06:00
Ken Early: It’s time for Alexander-Arnold to move to the middle 06:00
Leinster face a formidable foe in semi-final against La Rochelle 01:00
Here is your handy guide to sport on television this week