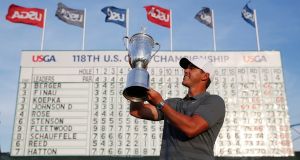 While Brooks Koepka posed with the US Trophy by the 18th green at Shinnecock Hills on Sunday evening, Ricky Elliott had a prize of his own.

As is tradition, the winning caddie gets to keep the flag – number 18 – and the Northern Irishman, gripped the flagstick with a strength that was not unlike that shown by his boss down the stretch. He wasn’t letting go, period.

Elliott, more than anyone, is aware Koepka is the real deal. Becoming a back-to-back US Open champion is a rare feat, last achieved by Curtis Strange in 1989, and although Koepka doesn’t win often – this was just his third win on the PGA Tour –when he does, he wins big.

And the player’s latest success, adding $2.16m to his bank balance and propelling him up to world number four, only served to demonstrate his resilience, coming as it did after a four-month lay-off due to wrist injury during which time he missed out on playing in the Masters.

“He did all his work at home, did what he had to do to get fit and healthy again. I think it’s validation that he is one of the best players in the world. It’s not easy to win one; but if you win two, I think it will feel even better . . . I know he’s never been to Ireland so I am trying to talk him into going.

“He’s forced to go to my home town next year [for the British Open],” said Elliott, who said he might try to persuade him to play an Irish Open at some point too. “But I’m not sure.”

Theirs is a partnership that came about almost by accident when Koepka – who was playing on the Challenge Tour in Europe in 2013 – qualified for the US PGA. His regular bagman couldn’t make it to the United States, Koepka’s coach Claude Harmon asked Elliott if he’d take the bag and the rest, as they say, is history.

“Ricky is honestly one of my best friends. I love the guy to death. He’s an incredible caddie,” said Koepka, who – seven-over at one point of his opening round – recounted how Elliott had played the role of on-course psychologist in getting him back on track.

“He told me get it going, get it back, [said], ‘We’re not out of this thing’. He was right. ‘And just keep plugging away, there’s a lot of golf left. You never know what the conditions are going to do’. I think he told me it was going to get easier, so just hang in there, and it did on Friday.”

Koepka’s win – shooting a final round 68 for a total of 281, one-over-par – was in contrast to his breakthrough win at Erin Hills last year where he overpowered the course and the field.

This time, with Tommy Fleetwood firing a closing 63 to set a clubhouse target of two-over, Koepka had to scramble like hell: on the 11th (for bogey), 12th and 14th holes (for pars), he was forced to take on the persona of Houdini to perform acts of escapology, at times from fescue, other times from bunkers. His short game, and his mental strength, stayed strong.

“I felt like I made those clutch eight- to ten-footers that you need to make to kind of keep the ball, [to] keep the momentum going,” said Koepka of that homeward run in the final round when talk with his playing partner and great friend Dustin Johnson was kept to a minimum.

Koepka recounted to how he’d kept away from all the talk in the locker room about the conditioning of the course, how he refused to get involved in any criticism.

As he explained: “Everybody’s got to play the same golf course. It is what it is. You got to keep going, keep plugging away, and don’t get caught up in all the talk and just keep focused on what you’re doing . . . if you start complaining, you’re looking for excuses. I’m not really one to make excuses.”

For the 28-year-old American, who took the non-traditional route when turning professional, in opting to play on the Challenge Tour in Europe and then the PGA European Tour before winning his PGA Tour card, the journey has not been short of drama.

Just a matter of months ago he was out of the game, after surgery on tendons in his wrist.

“ I couldn’t pick anything up with my left hand. I was in a soft cast all the way up to my elbow. It wasn’t fun. I don’t wish it upon anybody!”

Now, he’s back benching weights, hurling medicine balls in the gym and doing what he does best on the golf course.