Shinnecock Hills to be presented at its best this time around 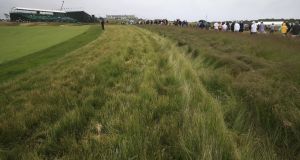 Varying cuts of grass in increasing heights away from the fairway on the 16th hole at Shinnecock Hills, venue of the 118th US Open in Southampton, New York. Photograph: TannenMaury/EPA

The scar tissue of what happened in the final round of the 2004 US Open hasn’t fully healed over, and probably won’t until this one is over and done. Only then will the healing process be complete.

What happened on that Sunday all of 14 years ago – when the USGA lost control of the course, as it went over the edge, with balls taking on a will of their own and players putting off the greens – resulted in average scores of 78.7. Not one player managed to record a sub-par round.

But Retief Goosen was the last man standing in the battle for survival.

The Par 3 seventh hole, in particular, was the source of misery for players as its scorched green was unputtable and the USGA instigated a policy of hand-watering the putting surface. Such carnage won’t be repeated on this occasion, not only because that is the last thing that the USGA would want but because a mistake is only a mistake if repeated.

This time, the USGA is certainly intent on ensuring there will be no repeat. An on-site weather monitoring system, soil moisture metres and a device to measure the firmness of greens should assist them.

“This is a different time, 14 years ago . . . there’s a lot more science to this. Even though golf course set-up is still an art, we look at moisture levels, meteorology is better, we have firmness levels, we have speed levels. We want this to be a true test of golf, where every aspect of your game is tested,” said Mike Davis, the CEO of the USGA.

“ It rewards players that can work the ball both left and right and right and left, knock down shots, hit high shots. So it really, indeed, is what we’re looking for as a test . . . . we could not be more pleased with where the condition of the golf course is.”

Since last hosting the US Open in 2004, the course has undergone major renovation to restore it to the vision of course designer William Flynn. Old photographs were used to recreate the original sized greens, trees and bushes were removed and there was a focus placed on restoring the historical angles and widths of the course under the guidance of architects Bill Coore and Ben Crenshaw.

Also, the closely mown areas around the greens are a throwback in time to those designed by Flynn.

“They have really changed how Shinnecock plays. It’s more options to the game. You have to think about, when you miss, where the ball may bounce and roll to. It gives players more options, whether they want to try to recover with a putter, a bump and run, or a pitch,” said Davis.

One aspect of the course set-up that the USGA implemented was to narrow fairways. Where Coore and Crenshaw had envisaged some reaching out to 60 yards, the USGA brought them in to average just over 40 yards. Back in 2004, the fairways averaged 26 yards.

Of the examination that will be set this week, Davis explained: “We talk about incessantly how do we get the course to be really a great test of golf? As we say, get all 14 clubs dirty to make sure that these players are tested to the nth degree.”