Ryder Cup no longer just ‘an exhibition’ for Rory McIlroy

‘An event I didn’t really get, you realise you’re playing for something bigger than yourself’ 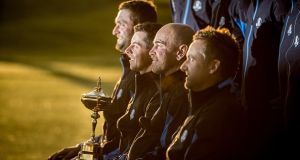 Rory McIlroy; the Ryder Cup years. It is difficult to know where to start. Even for an individual with such propensity to generate column inches, the sense of drama attached to McIlroy at the biennial meeting of Europe and the United States is eye-catching.

This is the event a young McIlroy once disregarded as “an exhibition”, at which he first encountered his now wife, Erica, amid a crazy car dash to make a Medinah tee time and where he played a match for the ages against Patrick Reed. Over three days at Hazeltine two years ago, and culminating in that epic duel with Reed, McIlroy admitted boorish galleries and a scene more akin to a football match gave him a headache.

The piecing of such events together draws a McIlroy smile. What next, one wonders, as the Ryder Cup circus pulls into Le Golf National? “I have never really thought about it in that way, what the Ryder Cup has meant to me,” he admits. “From an event I didn’t really get, then you are a part of it and realise you are playing for something bigger than yourself. We don’t get to do much of that. It means something else.

“I met Erica at Medinah and end up marrying her five years later. Gleneagles [IN 2014]was the first one where I felt like I was experienced enough, it was my third one, that I wanted to stand up and lead by example. I wanted to lead from the front and was really comfortable doing that. Paul McGinley helped me to evolve into playing that role. Last time was the same; I was on a high, I had won the week before, Darren Clarke had faith in me to put me on first in the singles. That was a first, which was really cool.

“I can’t believe this is going to be my fifth one. It goes so quickly. My proudest moments in golf have definitely been my major championships but my best experiences, by far, have been Ryder Cups. It’s the most fun I have had playing in a golf tournament. That started at Celtic Manor in 2010 and has not wavered the whole way through.”

At Hazeltine, McIlroy was the beating pulse of a European side which fell to comprehensive 17-11 defeat. Partisan crowds identified that; McIlroy was subject to constant heckling. By the time he faced Reed on the Sunday the atmosphere pushed – or broke – golfing boundaries. McIlroy’s demeanour changed as never before. “I look back at it and I think to myself that I know why I was so exhausted at the end of the week,” McIlroy says. “I know why I hit a wall midway through that match on Sunday.

“I think with you having the crowd on your side, you don’t have to be as boisterous and there won’t be the fever pitch element to it. Because it’s France, because it’s Europe, I don’t think it will be like that anyway. If I have to be dragged into something like that again, I’m more than happy to do it but I’d like it to be a little less stressful. I don’t think you should be put in a position on a golf course where that’s your reaction to holing a putt or your reaction to hitting a good shot.

“Erica made a good analogy the other day; she said it’s like putting a dog in a cage that doesn’t want to be there and then prodding it with something for a day. Sooner or later, it’s going to chew its way or do something to get out of that cage because it is going mad. That’s kind of how it felt at that Ryder Cup, it was such a cauldron. Those bursts of emotion just built up over a few days.”

McIlroy partnered Tiger Woods in Atlanta on Sunday, thereby being afforded a close-up view of the 42-year-old’s latest and arguably most significant triumph. As a self-confessed Woods “geek” in his formative years, it is little surprise McIlroy would relish an opportunity to battle directly with golf’s returning hero in a Ryder Cup environment. That it wasn’t a boyhood dream doesn’t prevent an adult ambition.

“Yes, 100per cent,” he confirms. “Whether that’s in the team format on Friday or Saturday or in the singles on Sunday. I’d love that.

“When I was young, I dreamt about the majors. I had a very different view of the Ryder Cup until I actually played in one. Everyone knows what I said. So I dreamt of playing Tiger but not in Ryder Cups; head to head in a major.

“It would be unbelievable this time. It will be a strange one because so many people there will be pro-Europe but everyone knows what he means to golf. He will get more support in France from everyone than any of the other US team members will, which is a strange phenomenon but shows what he has meant to the game.”

By virtue of McIlroy’s very nature, plus his standard professional domain being across the Atlantic, he will have as many friends on the US team this weekend as among his fellow European players. Don’t dare suggest, though, that a Ryder Cup defeat cannot sting. “I think the toughest thing is looking at the other team celebrating. You want to be them. I hadn’t had that experience until last time and it is the toughest thing about it. Whenever you are on a team and that collective isn’t the one celebrating, spraying champagne? It’s not a nice feeling.”

Of unquestionable benefit to Thomas Bjørn and Europe is that McIlroy is displaying traces of his best as the 2018 season draws to a close. The bad, which was on display in Atlanta last Sunday, can be far less damaging in a matchplay environment. The 29-year-old is, however, typically candid when assessing whether glory in this team dynamic can in any way offset his failure to add to a major haul of four this year.

“I don’t know . . . I could go and win all five of my matches and we don’t win the Ryder Cup and I’m sure I’ll wake up on Monday morning not feeling very good,” McIlroy says.

“At the end of the day I’m going to look back at my time at Ryder Cups, at my experiences, but I’ll always look back results-wise at what I’ve done as an individual. Winning the Ryder Cup this year would be awesome, if I am able to contribute to the team then even better. Would it make up for not winning at Carnoustie, for not giving it a better go at Augusta? No.”

McIlroy will make history on Friday by becoming the first golfer to win a quartet of majors and play in five Ryder Cups before the age of 30. History tells us the milestone will be met with fireworks. - Guardian