Thomas Bjorn’s rich pickings prove the difference in the end 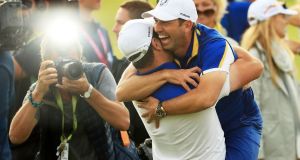 When it comes to judging a Ryder Cup captain, the heavy lifting usually gets done by intangible pulleys and levers. You get rated on stuff like the chemistry you were able to create and how well your partnerships gelled and all that jazz. Truth is, most of it is bunk. We presume it matters but nobody really knows for sure.

This time around, however, there are numbers that tell a very specific tale of what went right for Thomas Bjorn here this week and what went wrong for Jim Furyk. The captain’s picks on the European side contributed nine-and-a-half points to the final total. Their counterparts on the American side could only manage a paltry two.

It meant that Bjorn’s picks outscored Furyk’s by seven and a half points, which was ultimately the margin of victory. We can talk all night about captains getting too much credit for victories and two much blame for defeats but in this specific case, the numbers do it for us.

When Alex Noren’s putt finally dropped on the 18th to close out his singles match against Bryson DeChambeau, it meant that three of the four American picks finished the week having lost every match they played. It was the worst ever performance by a group of picks, with only rookie Tony Finau’s two points from three matches to show for it.

And it wasn’t as if this was some sort of statistical quirk. That singles match with Noren was the only time all week that DeChambeau, Tiger Woods or Phil Mickelson so much as forced a match to the final green. They had no hard-luck stories, no matches that got away from them on a cruel bounce or a horse-shoed putt. They came, they saw, they stank.

By contrast, all four of Bjorn’s picks counted. Henrik Stenson won all three of his matches, Sergio Garcia won three out of four, Ian Poulter put up two points and Paul Casey came in with one and a half. Stenson, Poulter and Garcia all posted a win in the singles, Casey ground out a half against Brooks Koepka in arguably the best match of the day and certainly the toughest.

The irony is that Bjorn took way more heat in the build-up for his picks than Furyk did. Stenson was injured, Casey had turned his back on the tour and Garcia couldn’t hit the ball out of his way. Poulter will be on the team for as long as he can lace up his golf shoes but overall it had an unimaginative feel to it. And yet who is banging the drum for Matt Wallace now?

“He wasn’t a bad pick, was he?” said Bjorn – fairly pointedly – of Garcia afterwards.

“I promised you three, I got you three,” Garcia beamed.

“Look,” Bjorn continued, “I think Sergio’s Ryder Cup story is a whole thing by itself. He’s very much at the centre of what we do – I’ve been saying this all the time. He walks into the room and he’s right in the middle of everything. All of these guys understand each other. All of these guys push each other forward.

“I’m not very good at adding up but I’m sure if I put these numbers together, they made the difference. I think I got it right.

The contrast with Mickelson and Woods on the other side could hardly have been more pronounced. The two old stagers in the US team were a dead weight all week, not only playing like drains but conveying none of the lust for battle that Garcia and the rest did on the European side.

Mickelson spent most of the week on the range, trying and failing to dig his game out of the dirt. Woods a walking cadaver at times, clearly washed out by the intense end to his summer. Even his performance in the press conference afterwards lacked wattage – he barely raised his voice above a mumble when asked for his reflections on the week.

“Well, we obviously didn’t win the cup,” Woods said. “We didn’t execute like we had planned. For me personally, I went 0-4. Obviously very disappointing. Those are four points that aren’t going towards our side. It’s going towards their side. To have a Ryder Cup end that way, for me personally, it doesn’t feel very good because I didn’t help my team-mates earn any points.

“For me, it’s been a lot of golf in a short period of time. I’ll have a better understanding of what my training needs to be for next year so that I can certainly endure the entire season. Because this year was very much up in the air as to how much I would play or even if I would play at all.”

In the end, they may have been better off had he not played at all. They certainly wouldn’t have been worse.