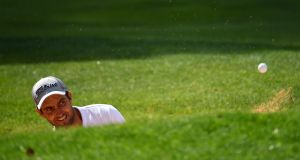 Edoardo Molinari of Italy plays out of the 17th greenside bunker during the first round of the Trophee Hassan II at Royal Golf Dar Es Salam in Rabat, Morocco. Photo: Ross Kinnaird/Getty Images

Enough would appear to be enough for Edoardo Molinari – nickname on tour is “Dodo” – who has taken on the role of crusader in trying to speed up play on the PGA European Tour, his patience worn thin by having to spend over five and a half hours to play a round of golf at the Trophee Hassan II in Morocco.

The Italian – the older brother of British Open champion Francesco – claimed in social media posts that “something serious” needed to be done to speed up play and that it was taking “way too long”, pointing out that there wasn’t even any rough on the course on the European Tour stop in north Africa.

Molinari’s frustration went so far that he broke the unwritten rule of publishing the list of those players who had been timed for slow play by the European Tour in recent tournaments, claiming there were a “few usual suspects” among those who got bad times.

However, the really eyebrow-raising revelation was not of those players who had been timed but of how few actually got bad times . . . . and that only three players – Adrian Otaegui, Louis Oosthuizen and Erik Van Rooyen – had been fined.

Their financial penalty? Just the €3,000 each, which would seem more like an incentive to continue with slow routines rather than encouraging any speeding up of play.

Still, Molinari – who Graeme McDowell observed as “flogging a dead horse” with his campaign – has promised to keep on the case, though, by posting further updates of the guilty parties as the tour continues its slow motion moves around the globe – China this week, England next week – but with Dodo leading the campaign to get things moving faster.

Lexi Thompson is taking another break from social media . . . . this time after taking too much online flak for playing a round of golf with US president Donald Trump.

Although Thompson has regularly played rounds with Trump, the latest one - which also included radio personality Rush Limbaugh – resulted in a series of online insults aimed in her direction which resulted in the 24-year-old deciding it was better to take time away from social media platforms: she has over 460,000 followers in twitter and in excess of 400,000 on instagram.

Thompson revealed future postings would only be by her management team. “….to read some of the hurtful things being said to me lately isn’t fair and I’m not dealing with it,” wrote Thompson in signing off.

5/22: Australian golfer Minjee Lee’s win in the LA Open gave her a fifth career win on the LPGA Tour . . . . the 22-year-old’s victory – by four strokes over South Korean Sei Young Kim – moved her to number two in the updated Rolex world rankings.

“When a 42-year-old player is calling him, he’s probably like, ‘why does he want to play with me?’” – Ryan Palmer on how he made the bold call to (successfully) hook up with Jon Rahm at the Zurich Classic, where the unlikely partnership emerged as winners.

“It’s been a long road. I’m grateful, but it’s been way too long. Way too many hours of work since I was a boy to today. I’m just proud that I can say I’m a winner on the European Tour” – Spain’s Jorge Campillo after winning the Trophee Hassan II in Morocco, the 229th tournament of his professional career.

“For my round (on Sunday) it doesn’t help when your in the toilet for hours on Saturday night still no excuse of the mistakes I made. Get better and move on. Looking forward to the British masters in Hillside next week” – Gavin Moynihan sharing the reason for his final round 82 which saw him plunge down the leaderboard in Morocco.

“Had a blast” – Ulster teenager Tom McKibbin on claiming the title at the Junior Invitational at Sage Valley in South Carolina. McKibbin got a new addition to his wardrobe, a gold coloured jacket which is the traditional prize at a tournament considered one of the foremost international junior tournaments. In addition to winning the actual tournament, McKibbin was also awarded the Paul S Simon Character award for his work with the Northern Irish Children’s Hospice. McKibbin is on a roll of late, having also won the prestigious Peter McEvoy tournament in England last month.

“Tommy played unbelievable all week and I was proud to be a part of @Zurich_Classic. The course played tough! Hats off to @JonRahmpga and @RyanPalmerPGA on the W!” – Sergio Garcia (who partnered with Tommy Fleetwood to finish tied-second) tipping the cap to Rahm and Palmer.

Q: When dropping a ball under a rule, a player drops the ball in the right way twice and both times the ball comes to rest just outside the relief area no nearer the hole. What is the ruling?

A: Under Rule 14.3c, the player must complete taking relief by placing the ball on the spot where the ball dropped a second time first touched the ground.