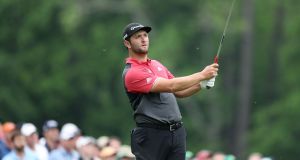 Jon Rahm and Ryan Palmer are the leading pair after two rounds at the Zurich Classic of New Orleans. Photo: David Cannon/Getty Images

Jon Rahm and Ryan Palmer combined for a bogey-free seven under par 65 and took the halfway lead after the second round at the Zurich Classic of New Orleans on Saturday.

Notching seven birdies in the alternate shot foursomes format, the duo posted a 15 under 129 halfway total at TPC Louisiana.

Spaniard Rahm and American Palmer led by one stroke from the teams of Rory Sabbatini and Brian Gay, and Peter Malnati and Billy Hurley III.

Sabbatini and Gay were poised to enjoy the halfway lead until they double-bogeyed their final hole, the Par 3 ninth, where Gay’s tee shot found the water.

Malnati and Hurley enjoyed a sleep in after completing their second round on Friday.

Just three shots off the lead at 12 under are Graeme McDowell and Henrik Stenson who shot a 67 and will be somewhat disappointed it wasn’t a 66 after a bogey six at the last. Séamus Power and David Hearn sit further back at eight under.

Half the field – 40 teams – had to return at the crack of dawn to complete the round following a long weather delay on Thursday.

The cut fell at eight-under 136. Among those to miss it were the Australian duo of Jason Day and Adam Scott, and the American partnership of Tony Finau and Kyle Stanley. Pádraig Harrington and Shane Lowry also won’t be playing in the final two rounds after a disappointing three over par round of 75 in the foursomes.

The third round, using the more forgiving fourball format, was scheduled to begin almost as soon as the second finished, hopefully getting the event back on schedule by the end of the day.