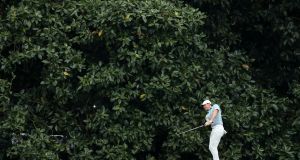 Rory McIlroy makes his first appearance since the Masters at the Wells Fargo Championship this weekend. Photo: David Cannon/Getty Images

Things move on. Rory McIlroy can forget about driving down Magnolia Lane for another 11 months, after his failure to add the Masters to his collection, and so move his thoughts on to the season’s other three Majors: the Northern Irishman – who will turn 30 years of age on Saturday – resumes tournament action in the Wells Fargo Championship at Quail Hollow this week, his only outing ahead of the upcoming US PGA.

While McIlroy – a two-time winner in Charlotte – is among four of the world’s top-10 in the field, Tiger Woods, used in promotional billboards in advance of the tournament in expectation he would be there, has decided to bypass it as the US Masters champion sticks to a policy of playing a reduced schedule this season as he targets the Majors.

In confirming Woods’s absence, the player’s agent Mark Steinberg explained: “Nobody should lose their mind over this. He’s still digesting and appreciating what happened (at Augusta). Honestly, he’s just not ready to play right now . . . . he’s not going to play as much. He’s just going to be smart about it. There’s a huge difference between being hurt and being sore. He’s sore after most tournaments he plays. He requires some downtime and doesn’t feel he has enough time to get ready (for Charlotte).”

For McIlroy, who took a two week break following his disappointment at the Masters, a return to Quail Hollow, in the week of his birthday, provides the opportunity to again contend on a favoured hunting ground. It was here that McIlroy achieved a breakthrough win on the PGA Tour with a final round 62 back in 2010, before claiming the title for a second time in 2015.

“It’s one of those golf courses that sets up well for me. It fits my eye. I feel like I can play my game around here and that’s served me pretty well over the years,” said McIlroy of his liking for the course, where he believes the number of mid- and long-irons required for approach shots plays to his strengths.

McIlroy has seven top-10 finishes on the PGA Tour so far this season, including a win in the Players championship, and his only time outside the top-10 came at the Masters. In this season’s revamped schedule, with the US PGA moving from its traditional August date in the calendar to an early slot in May, the Wells Fargo has lost out not only on Woods, but the likes of world number one Dustin Johnson and world number three Brooks Koepka.

McIlroy is one of three Irish players in the field in Charlotte, along with Séamus Power and Pádraig Harrington.

Power has transformed his season in recent weeks, with a tied-sixth finish at the RBC Heritage and a tied-fifth finish in the Zurich Classic in his last two appearances.

After missing the cut in the Texas Open last month, Power had slipped to 415th in the world rankings but has now moved up to 291st. Of greater importance to the Waterford man, however, is that his recent run of form has elevated him in the FedEx Cup rankings on the PGA Tour up to 117th as he bids to retain his tour card and also to make the end-of-season playoffs.

Meanwhile, Paul Dunne, yet to earn a place to the upcoming US PGA having slipped to 141st in the latest world rankings, is the lone Irish player in the field for this week’s European Tour event, the Volvo China Open in Chengdu.

On the Challenge Tour, there are six Irish players – Ruaidhrí McGee, Robin Dawson, Cormac Sharvin, Michael Hoey, Paul McBride and Daniel Peacock – in action in the Spanish Challenge in Izki.

Leona and Lisa Maguire, recipients of sponsors invitations, are in the field for the Ladies European Tour’s historic Omega Dubai Moonlight Challenge at the Emirates club. It will be the first tournament on any of the main professional circuits to be played exclusively under floodlights.

For Stephanie Meadow, this week’s LPGA Tour stop is the Mediheal Championship in California. The Northern Ireland golfer made the cut in the LA Open last week, finishing tied-69th, and is currently 115th on the order of merit.