British Open: Bringing it all back to the Home of Golf 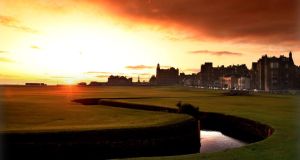 The sun rises behind the R&A Clubhouse on the par four, 18th hole ‘Tom Morris’ on the Old Course at St Andrews. Photograph: David Cannon/Getty Images

If ever you pay a visit to the graveyard up the town, the golfing history of St Andrews meets you at every turn. In the grounds of the old cathedral, the graves of Willie Auchterlonie, Allan Robertson and Old and Young Tom Morris among others can be found.

Old Tom’s is a plain burial place, but his son’s is the opposite, anything but plain: Young Tom’s has a statue, of himself, taking his stance with club in hand and with his left foot and left shoulder drawn back; and the ground around the plot is littered with dozens and dozens of wooden tees brought from around the world, left by those who have visited to pay tribute and their respects.

For sure, there is something very different about this university town with its square tower and twin spires; and especially so when it comes to the sport of golf.

St Andrews really is the Home of Golf, where the game was nurtured and where ghosts of the past serve as a reminder of its links with the British Open championship. Come next Thursday’s first round, it will be the 29th time that golf’s oldest Major has been played on its famed layout.

No, there won’t be any Rory McIlroy, not this time. No staring down an approach shot, no twirling of the club. And, as much a pity as his absence is, it again only serves to underpin that, in this game, nothing can ever be taken for granted.

That first staging of the Open on the Old Course was in 1873, when Tom Kidd shot rounds of 91-88 to win the accolade of Champion Golfer. The first report of Kidd’s win in The Fifeshire Journal was like a back-handed compliment, describing how he had “the high honour of champion . . . although he has won it with so high a score”.

When the Open returned to St Andrews in 1876, there was a controversial outcome. Davie Strath, the local favourite and a friend of Young Tom Morris, had – unknown to him – struck another player’s foot on the 17th green which prevented his ball rolling onto the road and holed out for a five.

Objections were made, and the committee met to discuss disqualification but no decision was made. The championship was eventually declared a tie between Strath and Bob Martin and the committee reasoned that a play-off should be staged to determine the outcome and the prizemoney, £10 to the winner, £5 to the runner-up. But Strath declined to play. Martin walked the course and was declared the winner.

That streak of home -bred winners ended when Englishman JH Taylor won on the next two visits, in 1895 and 1900, before the Scottish link resumed with James Braid’s wins of 1905 and 1910. The sequence of returning to the course every five years was, by now, in train.

Which brings us on to Bobby Jones, who would, in time, join US president Benjamin Franklin as a freeman of St Andrews. Jones’s first time to play the Old Course hardly indicated such a bond. He first played it in 1921 and famously ripped up his scorecard after failing to extricate his ball from a deep bunker on the Par 3 11th. Six years later, Jones would return to the links and successfully defend his Open title.

In Jones’s Grand Slam year of 1930, he added the British Amateur championship at St Andrews onto his schedule. By then, he had been adopted as one of their own by the Scots.

“It’s a wonderful experience to go about a town where people wave at you from doorways and windows, where strangers smile and greet you by name, often your first name, and where a simple and direct courtesy is the outstanding characteristic,” Jones remarked.

That bond would be cemented some years later, in 1958, when was made a freeman of the town.

In his acceptance of the honour, Jones would tell his hosts: “I could take out of my life everything except my experiences at St Andrews, and I would still have had a rich and full life.”

Jack Nicklaus got that. The Golden Bear won two Claret Jugs on the Old Course, the first in 1970 and the second in 1978. In that 1970 win, it will be remembered, Doug Sanders had a short putt – two and a half feet – on the 18th green of the final round to win, only to miss. Nicklaus won the following day’s play-off.

“I remember I used to go down to Bob Jones’s cabin before The Masters every year, and he talked a little bit about St Andrews. And the one thing he said, you know, ‘Your golfing career as a champion is not complete unless you win at St Andrews’. And I always had that in the back of my mind. Actually, it was in the front of my mind,” Nicklaus recalled.

It was appropriate that Nicklaus’s last competitive round came at the 2005 British Open at St Andrews. When the R&A’s Peter Dawson – who arranged for the championship to be moved forward a year so that Nicklaus, in his 65th year, could use it to bow out – was asked if there were any special tribute planned for the 18-times Major champion, he replied: “Jack would rather be treated as a competitor than a monument”.

“The Old Course to me is a very special place just because of what it is, where it is, how it sits here and how it relates to the history of the game of golf. That’s what’s special. I suppose if you took St Andrews and put it somewhere else it would be another golf course. But because it’s here, because of what it is and what it meant to the game of golf it becomes something very, very special,” said Nicklaus.

Tiger Woods also got that connect with history. How very appropriate then that Woods would win the 2000 British open at St Andrews, a win that would – at the age of 24 – have him join Nicklaus, Ben Hogan, Gary Player and Gene Sarazen as the only players to win the professional career Grand Slam.

Not only that, but Woods put on a masterclass that year. He won by eight shots from distant runners-up Ernie Els and Thomas Bjorn and the coronation was all the more fitting in that it took place at St Andrews.

What new piece of history awaits this coming week on the Old Course?