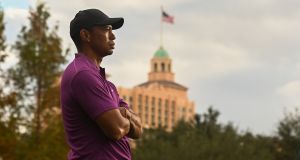 The black Mercedes sedan had two blown tires when police found it idling with its brake lights bright and blinker flashing on the side of an empty six-lane road at 2am. When police happened upon the scene, the man at the wheel was asleep. To hear him slur his words as officers asked where he was going and where he had been, he might well have been somewhere on the fifth planet from the sun and not in the bedroom community that is Jupiter, Florida. And when he added that, no, he had not been drinking, an officer couldn’t help but wonder, “Are you sure?”

Things only got worse once the man – zonked out on prescription drugs, as it happened – staggered his 6ft frame out of the car and on to the cool blacktop, a rippling vision of Florida Man chic in long sleeves, shorts and bare feet. He couldn’t keep his hand down tracking a light beam, couldn’t heel-toe a straight line, couldn’t recite the alphabet because he thought he was being asked “to sing the national anthem backwards.” When the officer asked if he had anything prickly on his person, the man, after an initial denial, confessed to “a few screws in the body” – mementoes from surgeries on his left knee and back. The entire incident goes down in about 20 minutes, maybe less. And as police cam B-roll goes, bless, it’s fairly G-rated. It’s only after the mind races to connect it to the more grisly police videos that have filled our timelines over the past six or so years, and this summer in particular, does this clip from Jupiter leave you breathless. That’s when you realise that, really, could have been the last we ever saw of Tiger Woods.

The dashcam footage of Woods’s 2017 DUI stop is just one of the many pivotal moments recalled in Tiger, a two-part documentary on the superstar golfer that debuts on HBO this Sunday in the US, with part two airing the following week. It is a quintessential HBO Sports documentary, which is to say it takes a thorough and fair look at the rise, fall and recovery of one of history’s most sphinxlike figures. You won’t be surprised to learn that Woods politely declined an invitation to participate in this project but, rest assured, his face and voice are well represented in a breadth of archival interviews that date all the way back to his appearance on the Mike Douglas Show at the age of two opposite Jimmy Stewart and Bob Hope.

Given how insanely long the 45-year-old Woods has been a certifiably famous person, you may wonder what more there is to learn about a man whose life would become a marker of time in our own. (Where were you when he crushed at Augusta in ’97? Or when he hit that fire hydrant on Thanksgiving in 2009?) But there’s plenty of protein here for viewers who don’t mind reckoning with our shared obsession with “godding up” sports heroes and celebs just to watch them tumble. “The interesting thing to me is how quickly and how much glee the media – and, in some quarters, the public – took in his downfall,” says Matthew Hamachek, who is the co-director of Tiger alongside Matt Heineman. “That was very telling.”

In Woods’s case, though, the lofty expectations started with his late father, Earl – who famously told Sports Illustrated’s Gary Smith that his son was “The Chosen One”. Earl’s presence looms large in the first-half of the documentary, and there’s no missing the bond between father and son in the pride and power with which the boy repeatedly refers to himself as black. It isn’t until the Nike money starts rushing in and Earl’s philandering become a threat to his son’s saintly brand image (oh, the irony) that you hear Tiger referring to his race as “Cablinasian”. Never mind if that wasn’t the word Jupiter police used in their report.

Woods’s DUI charge, which was lawyered down to a reckless driving plea, lingers in the doc like a baddie in a slasher flick. But safe shelter is easy enough to find among a slew of supporting characters in Tiger, who range from close family friend Pete McDaniel to longtime bagman Steve Williams – none of whom, alas, are close to Woods now. And yet: “The thing that was most surprising to me in the process is that people who even had acrimonious splits from Tiger are all fiercely protective of him,” Hamachek says. “These are people who really had a front-row seat to the pressures and expectations thrust upon him and felt like part of their job was to protect him from the world. Earning these people’s trust was extremely difficult.”

Dina Parr, the golfer’s high school sweetheart, experienced one of the harsher Woods breakups, via letter. And yet her home videos of a teenage Woods cutting loose offer a glimpse into the sweet soul underneath the driver-clobbering automaton in that blood-red Sunday polo.

But she is unlikely to be the woman in Woods’s life in which viewers of this documentary are most interested. Nor for that matter is Elin, his ex-wife and mother to his two children. No, that honor goes to Rachel Uchitel, the first of several women to be outed as a Woods mistress and easily the biggest get for the makers of the documentary. And to watch the show reflect on the fevered tabloid media effort to out her and Woods’s other paramours in 2009, with the daily revelations of lose-my-number voicemails and the golfer’s marathon sex drive, is to be reminded of a simpler time when the National Enquirer – not TMZ – was the sleaziest gossip rag and Taiwanese news animation was totally a thing.

Woods’s sex-addicted downward spiral fuel the doc’s second half, and it leaves you wondering whether Elin might have forgiven her husband’s transgressions if they had been flings and not fully blown emotional relationships, and whether Woods has even one black women in his life. They don’t surface in his romantic life, and they don’t surface in this documentary either. “I don’t think it’s happenstance,” says executive producer Sam Pollard. “Growing up in America as a person of color, when you’re engaged in the white world, sometimes you don’t connect with your own people like people assume that you would.” Not even Royce, the older half-sister from Earl’s first marriage who fed Woods and did his laundry while he was breaking NCAA records at Stanford, makes an appearance. Think of this as the white space in an otherwise textured portrait of a complicated man.

At the very least, Tiger should leave you feeling sympathetic for the man – who, despite his incredible athletic gifts and huge fame, never looked like he chose to be The Chosen One. It could well have you going back to read the statement he released after the police killing of George Floyd and how far out of the way it went to empathise with law enforcement who “train so diligently to understand how, when and where to use force.” Those words, typical Woods, seemed so cautious and even cowardly then – especially when compared to the more assertive tone struck by Michael Jordan, the greatest political fence sitter of all time until last summer. But after watching the doc you appreciate the statement for what it is – the words of a man who is just trying to survive another day in America. Sounds mighty black to me. – Guardian