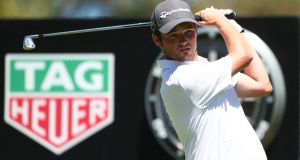 Cormac Sharvin: finished one stroke outside the mark that rewarded the top 25 players and ties with a full European Tour card. Photograph: Paul Kane/Getty Images

Cormac Sharvin missed out on a full European Tour card by millimetres and that’s not a sporting euphemism for the fact that he was one stroke outside the mark that rewarded the top 25 players and ties for next season following the 108-hole marathon of Qualifying-School during the week.

An incident in the final round renders his story even more gut-wrenching as the 26-year-old Ardglass golfer inadvertently teed up millimetres in front of tee markers.

The European Tour confirmed that: “During his sixth and final round at Qualifying School final stage, Cormac Sharvin incurred a two-shot penalty on the seventh hole after it was discovered he teed off outside the teeing ground (and) as a result breaking Rule 11.4b.

“It was discovered immediately after he made the stroke. He was given a two-shot penalty and then replayed his tee shot. The stroke he made from outside the teeing ground did not count to his shot total. As a result he played his third to the green and held a putt for four.”

He actually put his tee shot into five feet, a remarkable achievement given the likely mental turmoil at the time, and holed the putt to boot. Compensation such as it is in the circumstances, is that he has a full card on the Challenge Tour for next season and may get a few starts on the European Tour in the early part of the season.

News of his misfortune had filtered through to the Irish players at the DP World Tour Championship in Dubai.

Rory McIlroy sympathised: “Naturally, I feel sorry for Cormac and hopefully, given he finished just one place outside of getting a full Tour card, he may still get enough starts in the New Year.”

Paul Dunne, whom Sharvin beat in an Irish Close final at Connemara golf club said: “Wow. I didn’t know why. I just assumed he hit it in a bush and got a two shot penalty. Wow that’s hard to take.

“I played with Cormac a few weeks ago; he’s playing great. Even with that category he’ll get a few starts here and there [on the European Tour] and have a full year on the Challenge Tour. His game is good enough so hopefully it will show on the big stage.”

Shane Lowry, whose caddie is Brian Martin, Cormac’s uncle, admitted: “I was very sorry for Cormac. I thought he was very, very unlucky. I’m sure he’ll get his day again.”