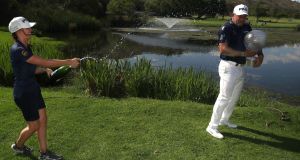 Many relationships have a finite point where the elasticity of give-and-take no longer snaps it back into place when disagreements become more commonplace. That is especially true of the dynamic between golfer and caddie.

Henry Longhurst, golf writer and commentator once observed that: “A good caddie is more than an assistant. He is a guide, philosopher and friend.” A problem arises when the communication becomes scrambled by frustration or irritation as both parties find the dialogue unsatisfactory.

Lee Westwood’s victory last weekend in the Nedbank Challenge was his first in four years and achieved without Billy Foster on the bag. Instead Westwood’s partner Helen Storey fulfilled the role, having done so previously when the Englishman was beaten in a four-way playoff for the Made in Denmark tournament title in early September. Westwood’s son, Sam has also toted his father’s bag recently at Valderamma.

Feeling slightly tender following a celebration that continued into the early morning exacerbated by a red eye Pro-Am tee-time ahead of this week’s DP World Tour Championship over the Greg Norman-designed Earth course in Dubai, Westwood spoke about the retention of friendship despite the parting with Foster and root cause of the split.

“Obviously we’re very good friends and I saw him here earlier, and we had a hug. He said, ‘well done.’ He was crying, he forgot to back me. Mine and Billy’s working relationship had got to a point where neither of us were gaining anything from it and we weren’t doing each other any good.

“I sat him down and said, ‘this is no good, I’m playing better when you’re not there than when you are there, so something’s obviously not working.” He said to me: ‘well, I can’t caddie for you how I want to caddie for you.” Westwood explained that what he required of a caddie had changed.

He continued: “I don’t require that much from a caddie anymore, Billy has obviously been out here for years and is very knowledgeable and wants to use all that knowledge to help somebody, and I could see he wasn’t happy doing that. So it just was one of those things that had to come to an end.

“We’ve obviously had a great time the last 10 years and been very successful, but people change, (as does) the way you work and look at things. You know, I’m 45 now. I’m not 35. You can’t carry on doing the same thing and expect something different out of him. I tried to change and unfortunately Billy didn’t feel comfortable changing with me. It was an amicable split.”

Westwood will have Glen Murray on his bag this week while Foster – when Rory McIlroy split with JP Fitzgerald, the Yorkshire man was thrust into the frame before Harry Diamond took over – is working with England’s Matt Fitzpatrick.

“Billy is one of the best caddies out here, so he’ll pick up a new bag. He’s working for Matt this week, and obviously Matt’s done well around here and he’ll have a chance. Billy will improve him, there’s no doubt about that.”

On a lighter note Westwood did ponder whether he was financially better off not having to hand over 10 per cent to his caddie last week but instead agreeing to underwrite a new kitchen. He explained: “I obviously don’t pay her a percentage, but the first one, losing in a playoff in Denmark, she wanted a new steamer.

“And it’s now because she saw it’s a bigger cheque at the Nedbank, she wants a new kitchen. We just moved house, so I might have to take her up on that. Might actually save me a few quid, getting a new kitchen instead of the 10 percent I would have been paying. I don’t know how big the kitchen’s going to be, though.”