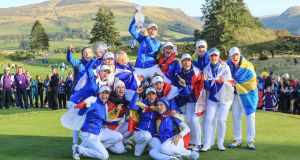 Europe celebrate their victory in the 2019 Solheim Cup at Gleneagles. Photograph: David Cannon/Getty

Catriona Matthew has been named as Europe captain for the 2021 Solheim Cup at Inverness Club in Ohio.

Matthew’s appointment was confirmed at Gleneagles, the venue where the 50-year-old masterminded a 14 1/2-13 1/2 victory over the United States in September — Europe’s first win in three stagings of the biennial event.

She told Sky Sports News: “I had to let the win here sink in, I don’t think it still has sunk in. I don’t think you are going to top that week but it’s quite different playing in America and I’m delighted and thrilled to have the opportunity to go and defend it.

“It would be great to try and do it away from home. I played most of my career out in the States so looking forward to having that chance.

“It is a lot more difficult. The crowd is definitely a huge advantage for the home team. The core of the team will be pretty similar, we have some good young talent coming through as well.

“We will have a good team. It will be close again but I think we can edge them out again.”

Suzann Petterson, who holed the winning putt on the final green and immediately retired from playing after the victory, was a contender for captaincy but Matthew insisted she will have the Norwegian on her team in some capacity in Toledo.

The Scot added: “I think I definitely would. Obviously I wouldn’t persuade her to play again — I think she’s done and dusted with that — but we will definitely have her there.

“She’s going to be a future captain so I’m sure she will be there in Inverness.”