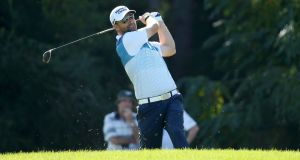 Pádraig Harrington in action on day one of the Turkish Airlines Open at The Montgomerie Maxx Royal in Belek, Turkey. Photograph: Jan Kruger/Getty Images

First, the bad bit. Pádraig Harrington – with two potential young Ryder Cuppers as eyewitnesses to the carnage – signed for double digits on one hole. The captain ran up a quintuple-bogey 10 on the 13th hole, his fourth, of the opening round of the Turkish Airlines Open after seeing three balls disappear into the water.

“These things happen. I hit my drive solid, thinking I had carried the water but it didn’t. I then took a drop and hit a lovely third shot and thought it was going to be on the green and was walking away but it dropped into the water. Then, I took a second and thought I had hit that one well and again it went into the water,” said Harrington.

To his credit , Harrington battled to the end and claimed three birdies in his closing four holes to sign for a 75 which meant he was not propping up the field. Alvaro Quiros was lumbered with that indignity.

Now, the good bit. Harrington got to see first-hand the emerging talent on tour. Mathias Schwab, the 24-year-old Austrian, continued his fine form with an opening 65 that gave him a share of the first round lead, while Frenchman Victor Perez, winner of the Alfred Dunhill Links last month, opened with a 68.

“Mathias played very well. I assume he would have been under some bit of pressure too. It was a good sign and he is certainly well able to play the game, that’s for sure. There are plenty of young guys out there fighting and it’s hard for them to set themselves apart but Victor and Mathias are doing that,” said Harrington, adding:

“At the end of the day, if these guys play their way into the team [for Whistling Straits], it’s irrelevant what I think. But if there is experience automatically in the team you are going to be picking rookies and if there are rookies in automatically then you are picking experience. They just need to play their golf and let their clubs do the talking. That’s always the best way.”

Schwab, seeking his first tour win and on the fringes of breaking into the world’s top-100 after a run of form which has seen him finish in the top-10 in five of his last eight tournaments, admitted: “It’s obviously nice [to play alongside Harrington] but I’m not really making too much of that, it’s always nice to play with a Major champion, someone who has achieved as much as he has. But other than that I’m just trying to play as well as I can.”

Schwab added: “It was a very good round for me. I got off to a nice start, five-under through eight and managed to keep the momentum going on the back nine. I was hitting it nicely today and made a few putts, so overall it was a good day for me.”

Harrington couldn’t have been but impressed.