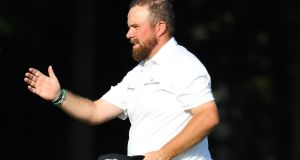 Shane Lowry after finishing his second round of the Turkish Airlines Open at The Montgomerie Maxx Royal in Antalya. Photograph: Warren Little/Getty Images

Shane Lowry didn’t have to look too far to see how golf can give with one hand and take with the other on Friday. One of his playing partners, Pablo Larrazabal, had the sweet sensation of acing the fifth hole with a four-iron, then was guilty of a spot of club throwing after hitting his approach to the ninth, his final hole, into the water.

No such histrionics from Lowry. On another beautifully sunny day, the Offalyman produced a wonderfully crafted 65 for a midway total of seven-under-par 137 to move upwards into a more challenging position in this Turkish Airlines Open at Montgomerie Maxx Royal in his bid to gain as many Race to Dubai ranking points as possible as the season nears its endgame.

With Austrian Mathias Schwab assuming outright ownership of the lead, on 12-under-par 132 after adding a 67 to his opening 65, Lowry had a better day with the putter and, for the most part, put on a performance of pin chasing as he took aim time after time at the flagsticks.

“I felt like I was hitting the fairways, then hitting my targets with my second shots. When I had a good number, I was able to get straight at the flag. It was one of those days, it was nice,” said Lowry.

There was quite a contrast in putting from one day to the next. Frustrated with his lot on Thursday, Lowry was more comfortable on day two.

“Look, it was more of a mental thing. I struggle to trust it when the greens are not rolling as good as you would like and that’s what happened me [on Thursday]. I missed a couple early on and just struggled with it from then on,” he admitted.

In the second round, Lowry, who started on the 10th, salvaged a par on the opening hole with a 20-footer and off he went. “I felt like I hit a decent wedge shot in, I just pulled it a yard and it trickled off the green and left a very smelly chip shot and didn’t make great work of that. It was nice to roll that in and I kicked on from there afterwards.”

In a round of eight birdies and a lone bogey – on the 17th, where his approach clipped a tree branch – Lowry effectively played target golf with his driver putting him into position and his iron play crisp and clean. Lowry had two eagle looks on par 5s but had to settle for birdies on all five of those long holes.

Lowry had a 12-feet birdie putt on his closing hole, which didn’t drop. “I said to Bo [his caddie] going down the last, it would be nice to hole the putt for a 64. I hit a good putt but, look, a 65, I am not going to complain too much about that.

“I will get out [over the weekend] and try to produce more of the same. I’ll just give it my best and see where that leaves me Sunday evening,” added Lowry, who is currently third in the Race to Dubai standings and aiming to close the gap on Bernd Wiesberger, who slipped to a second round 72 for 143.

Pádraig Harrington, too, went flag hunting but not always from the fairway. “I’m not exactly buzzing with confidence as my driving isn’t so good, and short and crooked is not great. I will work on that the next two days,” said the Dubliner, who signed for a 66 for three-under 141.

“I cracked the face of my driver a few weeks ago and it’s not quite there yet with the new driver I have. Another couple of days on the golf course will help as you can’t find the driver on the range, you have to find it out on the golf course. It may need a few more tweaks over the weekend re the set-up,” said Harrington.

Schwab, the 24-year-old Austrian seeking a breakthrough tour win, continued his good form of late to hold a one stroke 36-holes lead over a quartet of players: Danny Willett, Ross Fisher, Thomas Detry and Alex Noren.

“I think I’ll have to play aggressive golf and keep the foot on the gas pedal. Pars will definitely not be good enough this weekend,” said Schwab.

Justin Rose remained very much in touch in his bid to win the title for a third successive year. The Englishman shot a second successive 67 for 10-under 134 to lie two strokes off the lead, in a share of sixth place.

“I had to be patient in the middle of the round, felt like it stalled out there. . . to birdie three of the last four, it was a good finish and it keeps me [in contention]. I am just looking for that one round where I can click and get it all going,” said Rose.

British and Irish unless stated, par 72, (a) denotes amateurs