Caldwell makes himself at home at Celtic Manor

Co Down golfer four behind Thomas Pieters in Celtic Classic 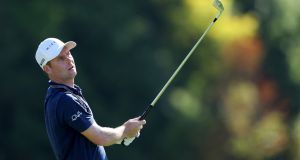 Jonathan Caldwell may have hit some speed-bumps of late, with missed cuts in his last two outings of the rebooted European Tour schedule, but the 36-year-old from Co Down got back on the right track with an opening round three-under-par 68 in the Celtic Classic at Celtic Manor outside Newport in Wales.

As long-hitting Belgian Thomas Pieters, without a win in almost a year dating back to his Czech Masters success, and playing for the first times since the Qatar Masters back in March, claimed the first round lead with a superbly crafted 64, Caldwell stuck diligently to his task in compiling a 68 that featured an eagle two on the par 4 15th hole.

Caldwell had a top-10 finish in the British Masters on the tour’s rebooting only to endure back-to-back missed cuts in the Hero Open and the English Championships, but got back into the groove in a round that included that superb eagle along with four birdies and only blighted by late bogeys on the 16th and 17th.

The other three Irish players in the field at the 2010 Ryder Cup venue found the going tougher, however, with Cormac Sharvin battling for a level par 71 but Gavin Moynihan’s poor run continued with a 74 and Paul McGinley, playing on the circuit for the first time in over 20 months, signed for a 75.

Pieters, who became a father for the first time during the tour’s shutdown due to Covid-19, showed no evidence of tournament rust as he came home in 29 strokes for 64 which gave the four-time career winner a one stroke lead over England’s Toby Tree and Australian Jake McLeod.

Frenchman Alex Levy became the first player to test positive for coronavirus since the European Tour’s restart and withdrew prior to the first round, while his compatriot Romain Wattel was also withdrawn after being identified as a close contact during the tour’s track and trace process.

Levy, who had spent some time at home in France, had initially returned a negative rest upon his arrival in Wales but because of the incubation period was re-tested and returned a positive test and must undergo a two-week self-isolation period before resuming competition.

Arsenal reward for Anfield win is home quarter-final with Man City 22:46
Dundalk in dreamland after hitting €3m Europa League jackpot 22:32
Filippo Giovagnoli soaks it all in as Dundalk march on to join the big fish 22:34
Harry Kane bags hat-trick as Spurs hit seven against Maccabi Haifa 22:23
Dundalk survive wobble to make group stages of Europa League 22:34
Here is your handy guide to sport on television this week