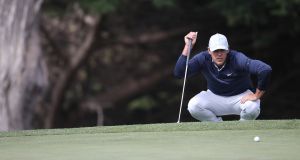 Brooks Koepka lines up his putt on the 18th green during the first round of the 2020 PGA Championship at TPC Harding Park in San Francisco, California. Photo: Sean M. Haffey/Getty Images

When Brooks Koepka teed off in the quiet calm of Thursday morning, he figured he was not just a contender, but a favorite to win the US PGA Championship.

All golfers ponder their chances against the field. Koepka is the one willing to do the maths out loud.

“The way the golf course sets up eliminates pretty much half the guys,” Koepka said on Tuesday, with bluntness that has come to define his personality and championship play.

“And then from there, half of those guys probably won’t play well. Then from there, I feel like, mentally, I can beat them, the other half. So you’ve probably got 10 guys. That’s the way I see it.”

On Thursday, with the shiny Wanamaker Trophy that he has won the past two years perched on a table nearby as a reminder of the stakes, he sent his first drive at TPC Harding Park nearly 300 yards. By the time he returned to the clubhouse hours later, his hopes of becoming the first player in nearly 100 years to win the US PGA Championship in three consecutive years were firmly intact.

Koepka shot a four-under-par 66, one stroke off the first-round lead, held by Jason Day and Brendon Todd. His always brimming confidence verged on spilling over.

“I’m excited for the next three days,” he said. His laid-back sentences never end with exclamation points. “I can definitely play a lot better, and just need to tidy a few things up, and we’ll be there come Sunday on the back nine.”

It would be no surprise. Not only is Koepka the best major-tournament player of the past few years, he is a brash counterpoint to golf’s gentry, as honest as a polygraph test, as composed as the stoic Monterey cypress trees that line the Harding Park fairways.

He has no interest in making golf friends — he told Golfweek recently that he is “not close with any of the guys out here” — perhaps because he is brazen in his singular pursuit: to win more Majors.

Koepka, 30, said he has plenty of friends at home in Florida, and he usually plays practice rounds alone on the tour. It is him against the field, and he always likes his chances.

In his last five starts at golf’s four Majors, he has finished no worse than fourth.

Some widely known contemporaries still long for their first major championships — players like Rickie Fowler, Jon Rahm and Bryson DeChambeau. Others found major success, but have not won in several years — players like Rory McIlroy, Justin Spieth and Dustin Johnson.

Most of them get more attention than Koepka, perhaps because they better conform to the game’s traditional civility. Koepka does not soften his edges to make others more comfortable. Instead, he tweaks some of those that considered rivals — by everyone but Koepka.

Last year, when reporters suggested that Rory McIlroy was a rival, Koepka pointed out, accurately, that McIlroy had not won a Major since 2014, before Koepka was a full-time member of the tour.

Early this year, DeChambeau mocked Koepka’s physique, saying he did not have any abs. Koepka posted a photograph of his four Major trophies on Twitter and said DeChambeau was right. “I am 2 short of a 6 pack,” he wrote.

Koepka admits to a lesser focus during regular PGA Tour events. That much has been evident since golf restarted; nursing a partially torn patella tendon in his left knee, he has finished in the top 10 only twice. But he finished in a tie for second in the last tournament before the US PGA, a warning to others that his favourite time of year had arrived.

“I enjoy when it gets tough,” he said on Tuesday. “I enjoy when things get complicated. There’s always disaster lurking. It’s something I enjoy, where every shot really means something.”

With one more Major victory, Koepka would join the likes of Phil Mickelson, Seve Ballesteros and Byron Nelson, as a five-timer. Koepka wants to blow past that class. Over the winter, he set a new career goal: 10 Major titles.

The next 11 months may be telling. If all goes as scheduled, there will be seven Major championships.

Despite his bold talk, Koepka has the pedigree of an underdog. He was not a junior star like many of his peers. Lightly recruited for college, he went to Florida State (and was a four-time all-American), but spent a couple of seasons grinding on the European Tour before earning his PGA Tour card.

“Think that’s where a lot of that chip on the shoulder comes from, just always having to try to prove yourself,” Koepka said on Marty Smith’s America…The Podcast recently.

The US PGA, which bunched golf’s biggest names into several threesomes for Thursday and Friday, somehow did not pair Koepka with DeChambeau. Having built himself like a linebacker this year and now golf’s longest driver, DeChambeau teed off in the afternoon with Fowler and Adam Scott.

By then, Koepka, Zach Johnson, Justin Rose, Xander Schauffele and Martin Kaymer were among those already finished at four under.

Koepka was paired with Gary Woodland, who beat Koepka by three strokes at the 2019 US Open at Pebble Beach. Woodland shot a three-under 67 on Thursday, and served as a daylong reminder of all that separated Koepka from his last chance at a historic three-peat.

“It would mean extra because I wasn’t able to do it at the US Open,” Koepka said after his round. “I think that drove me nuts a little bit.”

He also played with Shane Lowry, a friend and frequent golf partner in Florida during the gaps in the rejiggered schedule this year. The two chummily bantered as they played on Thursday.

“He drove it long and straight, and he has that little fade back,” said Lowry, who shot 68. “He’ll be hard to beat this week, I’d say.”

Playing the back nine first, Koepka birdied four of Harding Park’s final six holes, the course’s exacting final exam of rough, trees and water. It was his key stretch, a promising omen. Koepka was not that impressed.

“No, you can always play them a little lower,” he said. “Birdie every one of them.”

Koepka has not always been cool under pressure. As a teenager, he said, he was a perfectionist in an imperfect game, undone by his temper. In college, he was subjected to a five-second rule. He had five seconds to react to a bad shot, and then move on.

It calmed him and transformed him. He eventually took it to its logical, emotion-free conclusion. Even as tournament pressures build, Koepka usually looks as comfortable as a superhero in a climactic scene.

He only thinks he should be holding the trophy — again — when it is all over. – New York Times