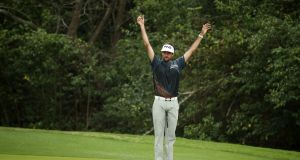 Bubba Watson reacts on the third green during his final match against Kevin Kisner in the WGC-Dell Match Play at Austin Country Club in Texas. Photograph: Gregory Shamus/Getty Images

Just when it seemed the 2018 edition of the Masters had been afforded sufficient pre-tournament storylines, enter Bubba Watson. The first Major of the year seldom arrives quietly but what a build-up has been assured. Watson, the Masters champion in 2012 and 2014, confirmed his return to the elite level of this sport with a comfortable success at the WGC Match Play in Austin.

With Tiger Woods, Phil Mickelson, Justin Thomas, Dustin Johnson, Rory McIlroy, Sergio Garcia and Jordan Spieth guaranteed as part of the Augusta narrative, perhaps the enigmatic Watson felt left out. He certainly gave the impression of precisely that being the case over five days in Texas.

Watson, already a PGA Tour winner in 2018, defeated Kevin Kisner 7&6 in the final at Austin Country Club. Kisner found himself five down after as many holes, perhaps the consequence of a gruelling semi-final against Alex Noren which stretched to a 19th hole. It is debatable, however, whether Kisner at his best would have been able to live with this inspired Watson performance. Only a missed Watson chance from four feet prevented the scenario of six up after six holes.

The outcome was already a formality, with the championship match a Watson procession. The 39-year-old was six ahead at the turn, with Kisner taking until the 11th to win his first hole of the final. He was seven down at that stage. A birdie four at the 12th confirmed Watson’s success.

This marks quite the professional and personal turnaround. Watson spent 2017 in a desperate grasp for form and good health. He lost significant weight, a matter later put down to an illness which the Floridian has been unwilling to specify. Watson ended last year 89th in the world rankings, a ludicrous scenario for someone of his talent. He even admitted the brief consideration of retirement.

Now, Watson is not only a key component of the Masters narrative but already almost certain to return to the Ryder Cup fold at the end of September. He looked on as a non-playing vice-captain when the United States trounced Europe at Hazeltine in 2016. Watson’s recent individual tournament success level, now 11 wins since 2010, is only bettered by Johnson and McIlroy.

By virtue of artistry, Watson remains different and compulsive viewing because of it. In the words of Nick Faldo: “He can do anything. He breaks all the rules. Just plays with his hands, pictures a shot, makes a decision. Feels it.” Watson’s Masters odds had been slashed by the time he lifted what is a second World Golf Championship trophy.

Earlier, Justin Thomas had admitted the burden of attempting to become world No 1 proved too difficult to handle as he slipped to a 3&2 semi-final loss against Watson. Thomas would have upstaged Johnson – who has topped the rankings for 58 successive weeks – had he reached the final but didn’t lead at any stage of the match against the left-hander.

“I haven’t had such a hard time not thinking about something so much,” said Thomas of the No 1 scenario. “And that really sucked. I couldn’t stop thinking about it, to be perfectly honest. You’re constantly getting questions about it with the media. But I need to be mentally stronger than that and understand that it’s just a match.

“Obviously I didn’t play very well but I definitely didn’t give him the match. He made a lot of birdies out there and played well enough to be deserving to be in the final match.

“It doesn’t matter how you lose, it’s tough. I didn’t play well today. I had a really hard time getting focused.”

Thomas then toiled again when losing 5&3 to Noren in the playoff for third place. – Guardian service