Bryson DeChambeau’s driver snaps on seventh tee at US PGA 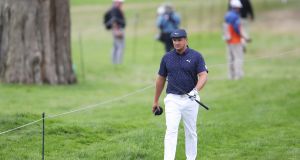 Bryson DeChambeau with his broken driver in his hands during the first round of the 2020 US PGA Championship. Photo: Sean M. Haffey/Getty Images

Bryson DeChambeau has been swinging his driver with such ferocity in recent months that it may only have been a matter of time before the bulked-up golfer’s beaten down club snapped in two pieces.

A cracking sound could be heard when DeChambeau, competing at the PGA Championship, hit his first shot at TPC Harding Park’s par-four seventh hole with the club on Thursday. It then came apart when he leaned on it to pick up his tee.

“That was weird, swinging too hard. I guess it’s all those swings I put in,” DeChambeau said with a laugh as he walked off the tee toward a ball that landed 296 yards away in the right rough.

DeChambeau added 20 pounds of muscle to his frame this year and has been the talk of the golf world since the PGA Tour returned in June from its Covid-19 hiatus, given both his imposing physique and startling distance off the tee.

Since the club was not damaged in a fit of anger or abuse, the rulebook allowed DeChambeau to ask for a replacement driver and one was retrieved by a member of his team before he played the ensuing hole.

“It’s through wear and tear,” he told reporters.

“This material isn’t going to last forever, no matter how strong you make it, but that thing has lasted over a year swinging it over 200-mile-an-hour ball speeds.