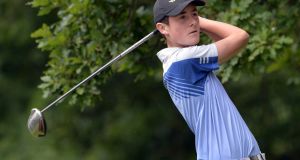 Robert Abernethy: young Dun Laoghaire member is through to the last 16 of the West of Ireland where he will meet Naas’s Robert Brazill. Picture by Pat Cashman

Schoolboy Robert Abernethy was one of the unlikely heroes as a host of big guns were silenced and the West of Ireland Amateur Open was blown wide open at County Sligo.

St Andrews Links Trophy holder O’Rourke beat Waterford’s Eanna Griffin 4 and 3 in the morning but then fell 3 and 2 to gritty 17-year old qualifier Abernethy from Dun Laoghaire in the afternoon.

A fifth-year student at Blackrock College and the Leinster Under-15 champion three years ago, Abernethy had so little confidence in his chances that he travelled west for Wednesday’s 18-hole pre-qualifier with little more than a change of clothes.

But after carding a 74 to earn a place in his first senior championship, he surprised himself by qualifying with ease with two more 74s, then beat Lahinch’s Thomas Neenan and the favourite to set up a last 16 showdown with Naas’s Robert Brazill today

“I wasn’t even expecting to get through the pre-qualifier, to be honest,” said the teenager. “I’m just happy to have played solid golf and to get through.”

Three up at the turn against 25-year-old favourite O’Rourke, Abernethy played superbly down the stretch to the delight of his beaming parents Bronagh and Colum, who came to Sligo armed with a change of clothes.

There were no smiles from many of the other big names with former North and Irish Close champion Galbraith – two up with two to play – losing to Michael Ryan from New Ross at the 19th in the first round.

Defending champion Yates lost 2 and 1 to 19-year old Hugh Foley from Royal Dublin, who went on to beat Dun Laoghaire’s Ted Higgins to set up a last 16 showdown with Newlands’ Jake Whelan.

Irish Close champion Gleeson birdied the last to force extra holes but lost on the 21st to a 30-foot birdie putt by Royal Dublin’s Barry Anderson, a native of nearby Ballincar and a former County Sligo member.