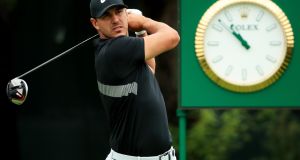 Brooks Koepka has garnered the most points in the official world rankings this season but goes into the Tour Championship in third. Photograph: Getty Images

You don’t need a scientific mind to know full well that the maths in the FedEx Cup don’t add up. As Isaac Newton once observed, “Truth is ever to be found in the simplicity, and not in the multiplicity and confusion of things.”

Golf is a numbers game, perhaps the ultimate numbers game, but for all the mind games behind the scenes in coming up with the convoluted endgame to the PGA Tour, it would seem that those numbers - with a $15 million jackpot payday for the championship - have gone askew.

Let’s throw out some facts and figures ahead of the Tour Championship which takes place at East Lake Country Club in Atlanta, where those 30 men who have made it to the season finale will divvy up wheelbarrows full of greenbacks with Justin Thomas heading into the event with a lead over everyone else in what is akin to gerrymandering.

First off: who has garnered the most points in the official world rankings this season? That would be Brooks Koepka, who has 362.49 points in reaffirming his status as the world’s number one. For the record, the player with the second most points through 2019 is Rory McIlroy. Koepka goes into the championship in third, already three strokes behind Thomas; McIlroy goes into the tournament in fifth, five strokes adrift.

Second point: the two winners of the opening two playoffs - Patrick Reed and Thomas - earned 2,000 FedEx Cup points in what were heavily weighted tournaments designed to add spice to the late-season shenanigans. Those wins effectively meant Reed and Thomas earned almost four times the amount awarded to Major winners (550) with the result that two of the season’s Major champions, Tiger Woods and Shane Lowry, found themselves elbowed out of the final 30.

Thirdly: Nothing against Jason Kokrak, but his inclusion in the field - in 30th - highlights the inadequacies of the re-jigged system. Kokrak failed to win all year (with a best finish of tied-second in the Valspar Championship).

You could actually go on and on.

The winner of the Tour Championship will earn $15 million which is actually more than Greg Norman earned in his entire PGA Tour career (the Great White Shark pocketed $14.5m, not allowing for inflation) while the sheer scale of the paydays available at this megabucks finale to the season is reflected in the total pot of $70 million divided between the top 125 in the FedEx Cup standings. When Tiger Woods made his “Hello World!” introduction to the professional game in 1996, the total purse for the season was $65.9 million.

Those behind the revamped qualifying certainly didn’t have Newton’s bent for simplicity in the equation but the only fact that now matters is that Thomas - one very well timed victory in his year’s work to date - has the grandest financial prize in the history of golf within his sights.