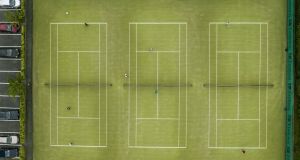 In his column today Gerry Thornley has looked at the pros and cons of playing rugby behind closed doors, and suggested while it is an alien prospect it could help bring about some positive changes. He writes: “As an aside, time was when no team on the planet has ever been so capable of waking the home crowd, and by extension themselves, by provoking a bout of fisticuffs, than Munster at Thomond Park. Past masters at it. But what’s the point if there’s no crowd to awaken?” However he also suggests games played in cavernous empty stadiums - and the eerie, quiet acoustics they would bring - could make it easier for referees and TMOs to police any overzealous behaviour on the pitch. “If a player goads an opponent who has been held up over the line by patting his head or pushing his nose into the ground, while uttering a few choice words in his shell-like, then penalise him. Simple as.”

Phase one of the plan to reopen Ireland began yesterday, which meant the reopening of sporting facilities such as golf courses and tennis courts. The easing of restrictions saw members - providing they live within 5km - returning to play at their beloved courses but under very different rules and regulations. Philip Reid visited Malahide Golf Club on its reopening, while John O’Sullivan observed some socially distanced tennis at Monkstown LTC.

1 Coronavirus: No further deaths reported as doctor warns second wave ‘weeks away’
2 Spread of invasive false widow spider ‘makes bites more likely’
3 Irish family stuck in Cyprus: ‘We hope our flights home are cancelled’
4 Ireland could eliminate Covid-19 ‘within months’ with tighter restrictions
5 Two brothers die in ‘tragic accident’ while diving in Co Tipperary
6 ‘This is simply disgusting’: Holidaymakers struggle amid mixed messages
7 Ruth Negga: ‘People who say they don’t consider skin colour... are you f**king blind?’
8 Why gift a son now if it eats into his tax-free inheritance threshold?
9 Bobby Storey: The IRA's planner and enforcer who stayed in the shadows
10 Close businesses selling alcohol to on-street drinkers, restaurant group says
11 Ictu warns Varadkar of ‘consequences’ for construction workers
12 Kanye West says he will run for US president in 2020
13 World View: Ireland weaponised by London in Brexit talks
14 Recruitment plan for Defence Forces ‘allowed to fail’
15 Dig for remains of Red Hugh O’Donnell in Spain reveals 16 skeletons
16 ‘I spent lockdown renovating a little piece of heaven’
17 The joy of jollof: A beginner’s guide to nutty, spicy, aromatic west African cuisine
18 Fontaines DC: ‘We’ve no licence to speak for Ireland’
19 Ryan confirms travel ‘green list’ will come in after July 20th
20 I think my boyfriend broke up with me because I was diagnosed with herpes. I’m devastated
21 Fintan O’Toole: Future of the American republic is in grave danger unless Trump is defeated
22 FF MEP apologises after flying to Dublin for election of Taoiseach despite Covid-19 rules
23 Patrick Freyne: You endearingly sentimental sociopath, I’ve just the show for you!
24 There is nowhere I’d rather wait out coronavirus than Uganda
25 Coronavirus: Spain imposes second local lockdown after flare-ups
26 Breda O’Brien: How many other Baby Christophers are there?
27 If hairdressers ran our schools every child would be going back in September
28 Government to avoid ‘cliff-edge’ on Covid-19 payment changes
29 Ray Bradbury, Moby Dick and the Irish connection
30 Pierce Brosnan: ‘I was an only child from a fractured family’
31 Into print – An Irishman’s Diary on memories of the Irish Press
32 Satay noodles: An antidote to bland pasta salads
33 Electric car drivers will soon have to pay to use ‘slow’ chargers
34 In Irish orphanages, being ‘coloured’ was a defect. I wish Mam had lived to see Black Lives Matter
35 IRFU in line for €75m windfall as CVC acquire 14.5% Six Nations stake
36 Haigh. I’m a black woman, and I happen to speak Irish
37 Hanging up my fork: My final three meals as Irish Times restaurant critic
38 Michael Caines: ‘You’re hanging upside down and you see a hand, lying there, and your arm’s gone’
39 Five arrests after group armed with iron bars and pitchfork attack estate
40 Netflix: 10 of the best new shows and films to watch in July
Real news has value SUBSCRIBE