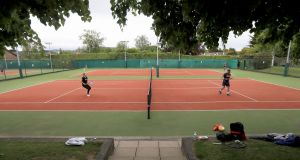 The specifics of the Covid-19 regulations that govern the resumption of tennis are immediately visible on stepping through the gates of the beautifully appointed and immaculately presented grounds of Monkstown Lawn Tennis club.

Notices displaying the rules and regulations, hand-sanitiser dispensers and a reminder of the social distancing etiquette in the form of a freshly spray-painted sign on the footpath represent the paraphernalia of the demarcation lines to which all tennis clubs must adhere as the sport emerges from a lockdown status.

A smiling face on the gate checks off the names on an A4 sheet of paper for those who have booked to play on an overcast morning, the distinctive sound of racquet on ball discernible on the short walk up the lane that eventually reveals six courts, all of which are occupied; four devoted to singles, two to one-on-one coaching.

Monkstown LTC President Susie Kennelly greets each new arrival with a smile and a word, keeping an eye on the brisk turnover at 50-minute intervals. The club grounds, specifically the access and egress from the courts, lend themselves to social distancing.

The morning’s activity – there has been a significant uptake to play from the club’s 800 members – marks the culmination of several weeks planning, about eight Zoom meetings for the executive, not to mention the WhatsApp messages that collectively might run into four figures.

Kennelly explained: “Luckily we have a very compliant membership. The over-70s was an issue, until Sunday but now they’re back in (the tennis) fold. We do have a lot of them but whether they’d want to play singles I don’t know.”

Quite apart from the physical and mental benefits of resuming the sport, Kennelly spotted another trend. “I noticed on the booking sheet that quite a number of husbands and wives who never play tennis together are now coming down to play,” she laughed.

The booking system is part of a remit for Jackie McCabe who has also been appointed Covid-19 officer for the club. Fielding inquiries must be time-consuming especially while holding down a full-time job. She admitted: “We are inundated with calls. It’s clunky at the moment in relation to juniors (looking to book). That’s the trickiest thing.

“We have adapted a system where all the parents are emailing me. This (the pandemic) is unprecedented and everyone is trying to find their way. It’s about finding the best system that works and implementing it quickly. It’s going to be trial and error.

“We are very conscious that Tennis Ireland has done a huge amount to get tennis back and have a responsibility to observe best practice. We have everyone’s name so if we have to contact trace, everyone’s name will be there.”

The twang of a broken racquet string is unmistakeable. It belongs to Julie Byrne, home from Northwestern University just outside Chicago where she played in the Big Ten Conference, Division One, in the NCAA, on a tennis scholarship. Having gone to Oklahoma originally for her freshman year she transferred to Northwestern, playing on the team for three years and will hopefully return to Chicago to complete a Masters having “studied Communications as my major and IMC, which is marketing as my minor.”

She’s hitting with the club’s senior coach, Stephen O’Shea, the latter part of a dynasty that includes John, Judy, Johnny and Lisa, and one that is synonymous with Monkstown, in a tennis and administrative capacity for more than half a century.

Sealed with a kiss

There is a difference cadence to the exchanges, the ball fizzing off the sweet spot with Byrne’s game unencumbered by having to borrow one of her coach’s racquets. The ball may not travel with the same velocity on the other courts but is doesn’t diminish the enjoyment of the participants, the climax of one match sealed with a kiss at the net; it was a husband and wife, everywhere else social distancing was impeccably observed.

As one hour bleeds into another, more members arrive to replace the departed, a scenario that will be replicated throughout the day and indeed the week and weeks ahead. The enthusiasm for tennis is palpable in the faces of the new arrivals.

O’Shea makes an interesting point that the current pandemic offers tennis clubs a wonderful opportunity to provide an outlet to people whose sporting needs can’t be satisfied elsewhere for the time being. It wouldn’t have been a difficult sell on a Monday morning in Monkstown LTC.