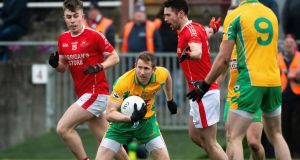 Gary Sice has been in brilliant form for Corofin on their run to the Connacht final. Photograph: Evan Logan/Inpho

LEINSTER CLUB SFC SEMI-FINAL
Portlaoise (Laois) v Éire Óg (Carlow), MW Hire O’Moore Park, 7.30pm – Live on RTÉ 2
Another chapter in the frontier rivalry of Laois and Carlow. Portlaoise were pushed to the edge by Wicklow champions St Pat’s and needed the new-fangled penalty shootout to advance. Éire Óg have been more impressive. Their experience in what is a third successive run at the province has sometimes been bitter, as at this stage last year when Mullinalaghta trimmed them and their composure disintegrated. With a fair smattering of familiar, next-generation names – Morrissey, Hayden, Murphy and Quinlan – they have the pedigree. More importantly, their work-rate bulldozed Sarsfields off the road in the quarter-final. Graham Brody is an influential return for the Laois men but the Carlow champions are on a roll. Verdict: Éire Óg

ALL-IRELAND WOMEN’S SENIOR CLUB FINAL
Kilkerrin-Clonberne (Galway) v Mourneabbey (Cork), LIT Gaelic Grounds, 5pm – Live on TG4
There was an impressively ruthless edge to KC’s comfortable dispatch of Foxrock-Cabinteely in the semi-final and there is a momentum to the Galway champions, who have twice lost to the Cork club at the semi-final stage. With the Ward sisters, Louise and Nicola, recently chosen as All Stars after Galway’s good championship, on board they have prospects. But Mourneabbey, liberated after last year’s All-Ireland breakthrough have their own strengths. Dublin’s Noelle Healy, working in Cork, is a key recruit and they have the firepower as well as the confidence to go back-to-back. Verdict: Mourneabbey

CONNACHT CLUB SFC FINAL
Corofin (Galway) v Pádraig Pearses (Roscommon), Tuam Stadium, 2.0 – Deferred, coverage,TG4
Pearses have been a lively presence to date since winning the club’s first county title but there would have to be question marks over the calibre of the opposition in Connacht to date. They have performed well, though, and carry clear scoring threats in Paul Carey, Hubert Darcy and Conor Payne and have experience and craft in the Daly brothers. They will also have been encouraged by the suspicion that the All-Ireland champions are chugging a bit in terms of form, needing a replay to see off Tuam and not being entirely authoritative in the defeat of Ballintubber. In a way though, that’s misleading. Last year they did much the same but picked up the tempo as Christmas approached and players returned from far-flung summers. They have Gary Sice in superlative form and well-deployed young talent off the bench – like Darragh Silke whose nerveless free iced the semi-final when it looked in the balance. Verdict: Corofin

LEINSTER CLUB SFC SEMI-FINAL
Garrycastle (Westmeath) v Ballyboden St Enda’s (Dublin), TEG Cusack Park, 1.30
Having just marked the 10th anniversary of the Westmeath side’s defeat of Ballyboden, observers will be aware that anything can happen in the club championship – a lesson rammed home when the Dublin champions’ predecessors Kilmacud got turned over last year by Mullinalaghta. Safe to say, so, that complacency won’t be a factor here – and why would it given Garrycastle made an All-Ireland final just eight seasons ago and still have half a dozen survivors, including Dessie Dolan – now on a lap of honour. The Dubliners are methodical and have the Basquels as their sharp edge. It looks enough. Verdict: Ballyboden

MUNSTER CLUB SHC FINAL
Borris-Ileigh (Tipperary) v Ballygunner (Waterford), Páirc Uí Rinn, 2.0 – Live TG4
Brendan Maher’s comments on the match were plausible. His Borris-Ileigh team have strayed into bonus territory but with a bubbling confidence that a first county title in 33 years brings. This, combined with a decent blend of experience and younger talent, means they come with few inhibitions to take on a Ballygunner outfit not exactly under enormous pressure but for whom it would be a 24-carat calamity were they not to retain their title. They know themselves that finals can go wrong, as they exploited favourites Na Piarsaigh’s under-performance to sweep to last year’s final. They have improved significantly on that with high-value newcomers, especially Dessie Hutchinson who, in the defeat of Patrickswell, combined high-yield scoring with some inventive touches – one that nearly brought a terrific goal, as he got the deftest of flicks with the goalkeeper out in no man’s land. Borris have the know-how of All-Ireland medallists Maher, Paddy Stapleton and Dan McCormack plus the menace of Kildare man Conor Kenny and the youthful JD Devaney. It’s not a bad package but the Gunners are locked and loaded. Verdict: Ballygunner