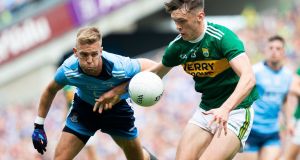 Jonny Cooper: received a red card in the All-Ireland final as he tried to shackle Kerry star David Clifford. “I’ve always gotten what I deserve and I do firmly believe that was the case, or is the case, in that example.” Photograph: Tom Honan

Pádraig Harrington never hid from his obsession for improvement, wearing it almost as a badge of honour. Truth be told, most elite level sportspeople share the same compulsions and they are there in Jonny Cooper too, burning brightly.

A self-confessed obsessive, if the five-in-a-row winning Dublin defender is not getting better then he is going backwards, in his own head at least.

Recently turned 30 and employed by Dublin City University, Cooper is studying for a masters degree in Organisational Behaviour and Psychology.

After last year’s championship, still thirsty for information, he took off for Australia and called on a couple of contacts at AFL clubs Collingwood and Greater Western Sydney to allow him in, to mine for more information.

Inevitably, all that thought gets tiring at times and if Cooper is honest, he didn’t get his balance just right in 2019, between work, football and life, leading to a dip in form. Unsurprisingly, it’s something he has thought about a lot since September.

“Has it tipped the scales a couple of times? Yeah, it definitely has. Have I not put in and invested time into relationships? Yep, that’s definitely been the case. Have I done too much on football and has that gone against me? Yeah. So it’s trying to now, with the experience I’ve gained, with lots of of failure and some successes, it’s trying to get that middle and that sweet spot.

“I certainly don’t think there’s anything wrong with being obsessive and driving on and not accepting anything other than being at the top. I think that’s the challenge of sport and I love it. It keeps me alive.”

Plenty of top Gaelic footballers and hurlers probably identify with most of what Cooper is talking about.

“Yeah, you see lots of them, the rugby guys for instance, I mentioned before that if you speak with Owen Farrell and these guys, they are just non-stop, so it’s interesting to hear different perspectives,” said Cooper.

“Some are non-stop. Some have four kids at home, and they figure it out, and some in the GAA obviously have big jobs and what not. It’s just trying to figure it out for you, what you are good at.

“Obsessive is probably my starting point and now I am trying to figure out a little bit more of a smart way of how to focus and extract the right amount from myself at the right time, by talking to the right people, asking the right questions and so on.”

Inevitably, it can be a struggle for a deep thinker to hit the off button.

With a mind that is constantly ticking over, the experience of being sent off in last year’s drawn All-Ireland final for getting too up close and personal with David Clifford tormented Cooper who pored over everything he could have done better.

“Yeah, yeah, you really are, I would have been [doing that],” he said.

“It wouldn’t necessarily be the case for other people but yeah, you are going back and that’s what I learned over the years, you go back to the eye of the storm, right back into the centre of it and find the root cause. You get honest opinions.

“With the tight turnaround time obviously it made it very unique but now looking back it was a very powerful experience, a very valuable experience to go back inside yourself and figure it out.”

Cooper could have blamed referee David Gough for issuing the two yellow cards that led to his dismissal but wasn’t about to do that.

“I’ve always gotten what I deserve and I do firmly believe that was the case, or is the case, in that example,” he accepted.

Having only returned from an extended winter break in mid-January, sitting out Dublin’s first three league games, he’s available for action on Saturday week against Donegal if called upon.

* Dublin footballer Jonny Cooper is pictured at the launch of Avonmore Protein Gold. A great-tasting chocolate flavoured milk drink containing 33g of protein per 500ml serving, including 20g of quality Whey protein. Avonmore Protein Gold is available in 500ml pack and will retail at €1.59 and can be used by those who wish to include additional protein in their diet. Protein contributes to the maintenance and growth of muscle mass and hardworking muscles need protein.