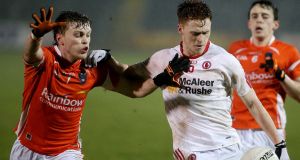 This is a small story from a small slice of a small world. But then, so is everything else. Mesh them all together and we have society, the walk-around, look-around stuff of life. So bear with us for a bit, if you will.

A month from now, on Tuesday, October 31st, the plug will officially be pulled from something called the Curriculum Sports Programme in Northern Ireland. The scheme has been running since 2007, at a cost of £1.3 million (€1.47 million) a year, and its purpose has been to place coaches from the GAA and the Irish Football Association with primary schools across the six counties. When November 1st arrives, 24 hurling and football coaches and 27 of their soccer counterparts will be out of a job. Moreover, 450 schools across Northern Ireland will lose the cornerstone of how they’ve taught PE for the past decade.

Pretty much everybody in the North thinks this is a bad idea. The list of things in Northern Irish life that can be said to be an unequivocal cross-community success is never very long for very long. But over the past 10 years, this programme would have always been nailed on for a place. In 2014 it won a UK-wide award for coaching project of the year. It has been held up as an example of best practice in Canada, where it was commended for co-operation between governing bodies and government departments. Everyone from politicians to teachers to pupils to parents to sporting bodies recognises it as something that works.

And now it’s gone. Or going, at any rate. Justin McNulty, former Armagh footballer and now an SDLP MLA, has been banging the drum for the past six months to try to get the decision to scrap the scheme overturned. It would be wrong to say he’s lost all hope; it would be equally wrong to say he has very much of it left.

“I led a delegation of MLAs to meet David Sterling, the head of the civil service,” McNulty says. “And he also understands how positive the scheme is but says his hands are tied, to a certain extent. But it’s also a bit ironic that over the last week, David Sterling was part of the delegation who were presenting the bid for the 2023 Rugby World Cup.

“For him to be on the one hand saying that, yes, we understand the positive effect of sport and the massive contribution the Rugby World Cup will make to Ireland going forward, and then, on the other hand, to be axing a programme that is specifically sports-orientated makes no sense to me.”

Well, here’s the sense it makes. The schools programme is at the back of the queue. It’s where the rubber meets the road. It’s the point at which nightly news abstractions such as austerity and Brexit and Stormont gridlock start to consume real life in gluttonous, indiscriminate chunks. One minute you’re smarming your way through Have I Got News For You, next thing 38,000 kids under the age of eight have a little less sport in their lives at the stroke of a pen.

Everybody punches down. The UK government, still addicted to austerity as it is, has for the past year been in the process of slicing the best part of £1 billion off the block grant to Northern Ireland. As a result the North’s Department of Education has had to find £159 million in budget cuts. As a result, schools have had to find ways of making those cuts or face having them made for them. The schools coaching programme is one of the cuts that have been made for them.

A minister would have to stand in front of the Assembly and the electorate and justify this. Obviously the head of the civil service is not an elected representative, so he is not answerable in that way

In turn the political vacuum has allowed the situation to get to this point. Because there is no government in Stormont, there is no minister for education. The deadlock between Sinn Féin and the DUP is as far as ever from being broken, and in their place, the civil service is running the country. By its nature, the civil service is faceless and nameless. David Sterling has no constituency to placate, no pressure group to yield to. He has numbers to hit and Westminster bean-counters to satisfy. The programme is a line in a budget sheet, easily crossed off.

“I would say it would be different if the executive was back up and running,” says McNulty. “Because if that was the case, then you would have a minister who would have to be accountable for this decision. A minister would have to stand in front of the Assembly and the electorate and justify this. Obviously the head of the civil service is not an elected representative, so he is not answerable in that way. So basically, it would be much more difficult for a politician to get rid of this scheme than it is for a civil servant.”

Eugene Young is director of coaching and games development at the Ulster Council. The schools programme actually started life as an Ulster Council initiative back in the early 2000s, with trained coaches working with schools to provide two hours a week of PE to kids between four and eight. When Caitriona Ruane took over as sports minister in 2007, she introduced it to primary schools across the North and broadened it out to include soccer coaches from the IFA. At its heights, the scheme employed 60 coaches; when it finishes up next month, 51 jobs will be lost.

The guiding principle for all the coaches working in the programme is the promotion of physical literacy. What that means in jargon-free terms is that they’re not really coaching football or hurling or soccer per se. They’re coaching the basics of running and jumping and throwing and catching and kicking, the stuff of sport in general rather than overloading on specific skills.

I think they’re trying to get an ‘out’. But I’m not sure how they would be able to get cover on it. I do believe that David Sterling recognises that it’s a very valuable programme and that it has huge positive impacts.

The upshot is that although these schools will still provide PE, they will do so now without the professional guidance of qualified coaches. And, as Eugene Young explains, the crucial follow-up element of the scheme within communities will now be lost.

“In my book, physical education is a specialist area,” says Young. “As would drama be, as would languages be. Teachers who are not totally comfortable with it will not put the same effort or expertise into it. The focus is on early years, four- to eight-year-olds. And it was all around this notion of physical literacy, rather than being sports-specific.

“What the coaches do is identify a particular class and work with it through nine months, the academic year. It’s not about the GAA driving an agenda or the IFA driving an agenda. It’s about children learning activities that they can keep for life.

“One of the key things for us is that the scheme linked into the community club. So for example, Joe McMahon worked in the scheme for seven or eight years in Tyrone, working with the Omagh schools. And then what he would do is work with the kids in the school during the day and then establish that link with the Omagh club outside of school hours. That makes a fantastic school-club link and it provides for continuity after school. That was one of the real benefits of it.

“The beauty of having the governing bodies involved is our capacity for keeping them engaged outside of the school building and outside of school hours. The scheme worked so well because we were able to facilitate that. We did some research on 11-year-olds who had been through the programme. The results we got were excellent – we found that they were involved in 13 different sporting activities and that 92 per cent of them were involved in at least one of them. So there was longevity there in terms of their participation. That’s what it’s all about.”

Any chance of a U-turn?

At a stroke Ulster GAA has lost 24 full-time GAA coaches. Antrim, with the biggest population base in the province, will lose six coaches. Fermanagh, with the smallest, will lose two. Tyrone, Derry, Down and Armagh all lose four apiece. The Ulster Council may try to replace them over time and possibly restart the scheme in another guise somewhere down the line, but there are no plans to do so at the minute. Unless there’s an 11th-hour climbdown by the department, the programme will wind up four weeks from now.

“But I’m just not sure will he have cover to reverse the cut. Because if he does it on this, then what about all the other cuts he has to make? There are cuts in health, cuts in education, cuts everywhere. So I do accept that his hands are tied to a certain extent.”

In politics everybody punches down until they find the people who have nobody below them. In this case, it’s kids between four and eight years old and a small, cheap initiative that worked for a decade. Through the recession, through everything. Gone, just like that.

How shameful. How self-defeating.