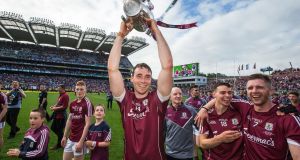 Galway’s All-Ireland-winning forward Conor Cooney has given his firm backing to the revised hurling championship structures, which go before Saturday’s special congress at Croke Park with increasing uncertainty surrounding their approval.

The leading motion from Central Council proposes two five-team round-robin formats in the Leinster and Munster championships: the top two would then contest the provincial final, the third-placed proceeding to All-Ireland quarter-finals with the defeated provincial finalists.

This format would also see two home matches built into the championship, favoured by the likes of Clare, Waterford and Limerick but especially Galway – who have been not been allowed to play any matches outside of Leinster since joining the provincial championship eight years ago.

“One of the main things Galway have been looking for is Leinster championship games in a home venue, so I’d be delighted if that passed,” said Cooney, speaking at the PwC offices in Dublin after picking up the GAA/GPA Player of the Month award for July.

“If you had a few teams coming up [to Galway], say Kilkenny coming up to Pearse Stadium, you’d get a packed house and it’d be fantastic. If it is passed I think it’d be great all round.

“We’ve been coming to Tullamore, Portlaoise, that’s where we’ve been playing most of our matches. So I suppose we have been there for years and we have contributed to the Leinster Championship and I think it’d be fair if we got a few home games so I think that’s important.”

Cooney would also like to see Galway’s inclusion in the Leinster under-21 championship.

“You’re looking at younger players and looking at development, competitive games is better rather than just going to the latter stages and I think it’d be a big plus for us on the senior side as well if we had a number of guys coming through who are hardened by matches against these Leinster teams.”

There are a number of similar motions going before Saturday’s special congress, and although last February’s annual congress accepted a motion to reduce the necessary majority for rule change from two-thirds to three-fifths, 60 per cent is still seen a daunting standard to have to reach.

Kilkenny are among those counties to express doubts, preferring to see how the football round-robin works out before committing the hurling champions to a similar format, even on an experimental basis.

Cooney, who scored 0-3 in the final win over Waterford, has little doubt 2017 was his best season –the important thing now being to build on it.

“I had injury problems in the past obviously and luckily enough, I’ve got past them. I still had a few knocks throughout the year but that was a big part of it as well. The lads had confidence in me as well.

“They put me in a position and they’d let you know that you were going to be a part of their plans and it kind of gave you that bit of confidence to go away and work on everything that you could work on and get yourself as right as possible to be in the best place physically.”

1 Trump endorsement by Jack Nicklaus leads to avalanche of dismay
2 France 35 Ireland 27: Ireland player ratings
3 Ireland fall short against France as England win Six Nations title
4 Stockdale’s blunder and French flair: Where Ireland came undone in Paris
5 World Handicap System: What is it? How does it work? Will my handicap change?
Real news has value SUBSCRIBE