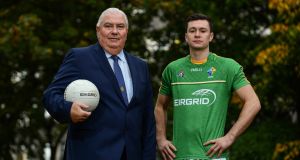 The International Rules series has always been about compromise, only this year it seems on an increasingly conflicting front.

Club versus country commitments remain largely unresolved and Ireland manager Joe Kernan has so far been unable to get full commitment from any of Dublin’s All-Ireland football winners.

The GAA have secured a new one-year sponsorship deal with EirGrid for the November Tests in Australia, although in keeping with the enduring uncertainty of the series it hasn’t gone beyond that. There is, however, a return to the two-Test series, aimed at generating greater interest within the Australian audience.

Kernan, who two years ago also managed Ireland to a narrow win over Australia in Croke Park, will therefore take several more weeks before naming his 23-man Irish panel.

The opening game taking place on Sunday, November 12th at the Adelaide Oval, and the deciding Test the following Saturday night, November 18th, at the Domain Stadium in Perth in what will be the final game held in that venue.

While adamant interest among the Irish players remains strong, Kernan admits the majority of first-choice selections are still caught up in their club championship: James McCarthy, Brian Fenton, Con O’Callaghan, Stephen Cluxton and 2015 Irish captain Bernard Brogan are some of the Dublin players he has contacted, but who have yet to make an absolute commitment.

“I have spoken to seven or eight of the boys at the minute, but they have club matches. Four or five said yes, two or three said no because of work commitments. It will take another couple of weeks to iron that out.

“There are eight or nine guys who are 100 per cent and the couple who said no it was genuine enough. In fairness to them, we’ve got to give them time. They’re after having a busy season, they’re after coming off a busy week so next week we’ll really be getting down to seeing who is and who isn’t in.

“But the beauty of this series is that there are players who are going to come out of the woodwork that you would not have thought off, like Gary Brennan a couple of years ago who was absolutely brilliant for us. A few other boys there, Brendan Murphy from Carlow is in and he did extremely well last weekend [at the first training session].”

Mayo’s Lee Keegan, vice-captain, is ruled out with a minor hip injury, but Kernan does hope to have some of his team-mates: “Tom Parsons has to come back to me, Aidan O’Shea, Chris Barrett and Brendan Harrison are all okay and there are two or three others who have to come back because of medical issues.”

Likewise with Tyrone’s Seán and Colm Cavanagh: “They were away with the club last weekend and they are away with the club this weekend. We have players coming from all over the country on a Friday and Saturday and then they play for their club on a Sunday. They have to be there so for the next couple of weeks we will sort out whether they are able to give that commitment if they did.”

The AFL have confirmed that Geelong Coach Chris Scott, who was assistant coach under Alastair Clarkson in the 2015 series, will be their head coach for the 2017 Tests. Australia won the 2014 series, 56-46 played in Australia, which was also a one-game series; in 2015, Ireland won 56-52.

Kernan has limited himself to three Irish players currently with AFL teams; Zach Tuohy from Laois (Geelong), Pearce Hanley from Mayo (Gold Coast) and Tyrone’s Conor McKenna (Essendon): “In fairness we wanted to keep as many Irish boys as possible, and if you look at the facts and the figures, these are the three top players out there.

“Conor is playing very well out there, has pace, power, accuracy, enthusiasm. He’s young, and really driven to look forward to it. And being Irish boys out there I’m sure they’ll get a lot of stick at times, but if they can go out and win with an Irish team out there it will do their profile no harm either.”

“Chris Scott is a bit like Alastair Clarkson, plays the game high, pushes from defence up to the middle of the field, and leaves the full-back line open, like they did last time. So he’s a winner too, and from what Zach was saying, he’s certainly one of those boys who will have a strong squad.

“And the Irish players still see it as a badge of honour. Anybody worth their salt will be excited about playing. The hardest thing is you can’t play them all, you can only play 23 but don’t think the boys are not committed to it, they really are.

“And it is worth persevering with provided we can make the game as exciting as maybe it was the last time, and us getting better at it, and then we put the onus on Australia . . . ‘this crowd of amateurs coming over from Ireland and putting the pressure on’. We’ll have no problem ever fielding a team.

“Providing both put out their best teams the games will be exciting and the Irish boys are always committed. The last time we went out, even though we didn’t play as well, we were totally committed and we were very unlucky at the end.”