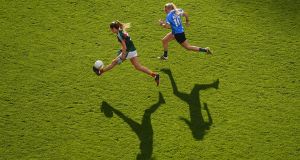 Grace Kelly of Mayo is tracked by Carla Rowe of Dublin. Photograph: Sportsfile

They took their time about it and made sure to wander down every laneway and back-road on their route to the Hogan Stand but none of that matters now. After three years of losing finals by a kick of a ball each time, Dublin made sure to wipe all mystery from the equation down the stretch this time.

Three goals in the closing eight minutes will do that for you. All-Ireland champions, no ifs, ands or maybes.

That Mick Bohan’s side have been the best team all year isn’t open to question. This was their fifth game of the summer and their fifth double-digit win.

Their only shortcoming here was the untimely generosity that kept Mayo in a game that should have been long gone by half-time. They finished with four goals but ought to have had eight. For that reason only, this remained a contest for a long portion of the afternoon.

Ultimately, Mayo were all too one-dimensional to live with a Dublin team whose intelligent running and superb conditioning allowed them to run riot in the closing stages.

Mao’s reliance on Cora Staunton made them entirely predictable and ensured that the iconic full-forward had no margin for error on the day.

Sadly for them, she took 16 shots over the course of the game and only scored with seven of them. The rest of the Mayo team only took seven shots between them.

Given that Mayo had seen two players walk to the sinbin on yellow cards earlier in the game – including a six-minute spell either side of half-time when they had to play with 13 against 15 – it was a near miracle they were still in with a shout.

Dublin made their extra player tell over the closing eight minutes and walked in two goals by substitute Sarah McCaffrey and another from Carla Rowe. Game, set, out the gap.

“I think the scoreboard flattered Dublin a little bit and I don’t mean that in any disrespectful way to great All-Ireland champions.

“There was a period early on in the game when we were worried, we had a little bit of dominance, certainly in the first 10 or 15 minutes of the game but we just weren’t reflecting that on the scoreboard at all.

“Dublin’s scores seemed to be coming that bit easier and then they set up really well. They defended really well and the couple of sin-bins really killed us because it allowed them to double up and break out at speed.”

He’s right about the early exchanges. Perhaps surprisingly for a team in its first All-Ireland final in 14 years, Mayo settled much the better. Staunton was scintillating early on, skating in to fist a point after four minutes and landing a 52-metre free soon after. But Mayo were so wasteful too – after 10 minutes they had four wides n the board and still only led 0-2 to 0-1.

Gradually, Dublin took the game over. Noelle Healy and Sinead Goldrick roared into the game and Sinéad Aherne ticked and tocked their scores with merciless precision.

Healy’s run directly through the middle of the Mayo defence set up Dublin’s opening goal after 21 minutes, Niamh McEvoy sliding a carpet finish past Yvonne Byrne in the Mayo goal to make it 1-5 to 0-5.

It was in the next 10-15 minutes that the game should have got away from Mayo. Byrne walked on a yellow card in the 25th minute after scything down Aherne with the Dublin captain in on goal. But sub-goalkeeper Aisling Tarpey saved a weak penalty from Aherne and Mayo stayed breathing. Soon after, Healy bore down on goal again but her shot came back off the foot of the post.

All in all, it meant that Mayo got to half-time only 1-6 to 0-6 behind. And for all of Dublin’s dominance, they sides still only managed 0-4 apiece in the first 22 minutes of the second half.

Though Mayo never really threatened a goal, all it would have taken was a mistake or a lucky bounce and they’d have been level.

It didn’t come, though. Dublin cleared the bench and in a battle between their fresh legs and clear heads and Mayo’s fatigue, there was only one winner.

Healy, McCaffrey and Molly Lamb filled their boots and Dublin were home and dry.

1 Dublin’s Diarmuid Connolly announces intercounty retirement at 33
2 Gordon D’Arcy: If South Africa moves up north, it could all go south
3 Charlesland Golf Club set to close permanently in December
4 Sargent labels Hockey Ireland approach to Covid-19 return to play as ‘tone deaf’
5 Mikel Arteta: Liverpool are at ‘the level we have to reach’
Real news has value SUBSCRIBE