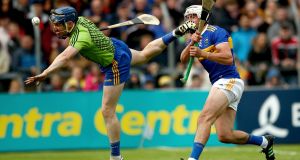 As he shuffled on and off the pitch in Ennis, the words of the world’s most over-qualified water-boy rang out.

“You should be careful about making forecasts with very little data,” said Eamon O’Shea after a league game in 2014. He was the Tipperary manager then, he’s nominally the Maor Uisce now. Whatever he is, he’s rarely all that far off the mark.

We spent the summer of 2018 holding certain truths to be self-evident. The Munster Championship is, was and ever shall be a bearpit. Nobody will win all their games, nobody will lose them all. Above all, winning away from home is more or less a moonshot.

Well now. What was that about very little data?

Here we are in 2019 and already Tipperary have gone through the province like a dose of salts. Their 3-21 to 0-17 victory in Ennis yesterday means that they’ve won games now by seven, 18 and 13 points. Liam Sheedy’s first job on taking them over was to get out of Munster – that task has been nailed at the earliest opportunity.

“It was a job well done,” Sheedy said afterwards. “The start was quite rocky – they matched us point for point and they got some wonderful scores here in front of me. Podge Collins scored one and Diarmuid Ryan scored one into the wind and I was thinking, ‘Oh my God’. But once we got [Noel McGrath’s] the goal, we found a bit of a flow and that stayed with us up until half-time. Then the goal off the post after half-time was a big score

“I though in fairness to our backs, the work they did forcing Clare to puck ball under pressure meant that some of their chance went wide rather than over the bar. From our point of view, if you’d told us last January that we’d be in this situation, I’d have been very happy.”

All of a sudden, Munster doesn’t look like that much of a bearpit. Tipp will make the final at their ease and look a distance clear of everyone else on the evidence so far.

And as for no team losing all their games, it appears Waterford are going to give it a right old rattle. Their summer is done indecently early, after a deadening 2-24 to 0-10 defeat at home to Limerick.

Goals from Aaron Gillane and Gearóid Hegarty – as well as a red card for Pauric O’Mahony for desperately ill-judged swipe in the second half – condemned Waterford to a second successive year in which they go into their final match with nothing to play for.

“It’s just disappointing the way one or two of the things went against us,” said Páraic Fanning afterwards. “We kind of got a little bit deflated because of it. We maybe should possible deal with that a bit better at times. Look, I wasn’t expecting a big backlash, I was expecting ourselves too to be delivering a fairly serious performance.

“Like, I thought we started okay, probably we shot three or four bad wides ourselves in the first 15 minutes or so. But that’s all. As I said when pressure comes on, sometimes you make decisions that aren’t quite with your normal gameplan. You have to try to dig something a little different and that happened maybe a little bit today.”

For Limerick, it was a chance to get their season back on track and they duly ate it up. In doing so, it means that five of the six matches so far in the 2019 Munster Championship have seen the home team beaten.

Considering it only happened once last year – when Tipp lost at home to Clare – that’s quite a turnaround. If Limerick are to make a defence of their All-Ireland, they need to restore the old order against Clare in the Gaelic Grounds next Sunday.

“Yeah, they’ve beaten us three times in the last three championship meetings,” said John Kiely. “They gave us a trimming down in Ennis last year so that’s going to need another massive big response from us and that’s the bottom line.

“We lost our first game at home and we’re going back before our own supporters next week and need to rock up with a decent performance, the best we can pull together in the next seven days. They deserve that and the performance the last day simply wasn’t good enough.”

In football meanwhile, the thoroughly enthralling Ulster Championship hit the heights again in Clones when Cavan and Armagh played out a 1-14 to 0-17 draw, refusing to be separated even after extra-time.

An 88th-minute point from old soldier Cian Mackey kept Cavan alive and sent the Ulster semi-final to a replay next Sunday. The game will be back in Clones, as part of a double-header with Monaghan v Fermanagh in the All-Ireland qualifiers.